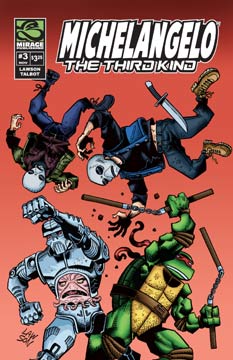 Hunted by both the police and the anti-alien militias, Michelangelo now finds himself deeply involved with an Utrom named Klag. While evading capture, the unusual duo must try to neutralize the attacks of a group called HAARM – the “Humans Against Aliens Resistance Movement” – before the world erupts with interplanetary violence!