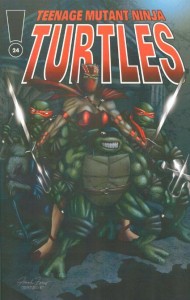 Flying the Triceraton aircar through the skies above New York, Don’s cyborg body suddenly goes on the fritz. Apologizing to Zog, Don crashes the aircar in the streets. At the current HQ of the New York branch of the Foot, Cheng addresses the Lady Shredder. He informs her that his spiritual tether to Splinter via the Astral Plane has proven most beneficial and that the two “surprises” she ordered for the Turtles have been prepared. An Elite Guard orders Cheng to leave so that the Lady Shredder can psychologically prepare herself for the coming battle with the Turtles. The Lady Shredder, actually Tang Amaya, remembers back thirty years, to her youth in Japan’s Chihaya village. There, she met a young Oroku Saki, who was training in the art of ninjutsu to slay the killer of his brother: Hamato Yoshi. Saki told Amaya that after killing his brother, Yoshi kidnapped her sister, Tang Shen, and fled to America. This shared tragedy bonded the two and together they gained entrance into the Foot Clan. They spent many years training together, and at age 18, Saki was elected to lead the New York branch of the Foot Clan while Amaya was selected to join him as a member of his Elite Guard.

Nineteen years ago. After learning the location of Hamato Yoshi and Tang Shen, Saki (now going by the alias “the Shredder”) left to gain his vengeance, forbidding Amaya from accompanying him. Saki returned, having slain Yoshi, though he arrived too late to save Shen from a deadly beating at the hands of Yoshi. As a token, Saki gave Amaya the gauntlet he used to slay Yoshi. For a time after that, Amaya took on the identity of “the Headhunter”, a mercenary taking contracts out on other underworld figures. This was all a ruse to help her weed out traitors within the Foot as well as enemies attempting to assassinate Saki. Impressed even more with her skill, Yoshi selected her to lead Goseico (a profitable business front for the Foot) following the death of Gosei Kenji. Years later, Saki was killed by a freakish ninja clan trained by Hamato Yoshi. Swearing vengeance, Amaya donned the gauntlet Saki had given her and prepared herself to hunt down the “turtles”. However, her vengeance would be postponed once the Foot Mystic Mashima resurrected the Shredder as a blasphemous creature stitched together by worms. Amaya rejected the Worm-Shredder as merely an imposter of Saki even if he retained all of the original Saki’s memories. The Worm-Shredder then revealed that he knew that Amaya had secretly bore Saki’s child and had given the girl up years ago. Amaya refused to divulge any further information, not that it mattered, as shortly afterward, the Worm-Shredder was decapitated by Yoshi’s clan.

More years passed and Amaya eventually had her first reckoning with the Turtles at the Goseico building. Though she lost Goseico in the battle, a sleeper agent within the company informed her that one of the Turtles was parading around in Saki’s armor. Enraged and ready to take her rightful place as leader of the New York Foot, Amaya used her contacts with the Oroku clan still among the Japanese branch of the Foot to solidify her leadership (though she feared such tactics might dishonor her in a manner similar to Karai). She then arranged for the duel between Raphael and Pimiko, two others claiming leadership of the New York Foot, as a means to draw her enemies out. Now going by the name Lady Shredder, Amaya dons her armor and prepares for her final assault on Yoshi’s clan. At the mausoleum HQ in Westwood Cemetery, the Turtles and Pimiko spar and prepare themselves for their impending battle with the Foot as Splinter and Dr. X look on. All are unaware that the Foot gather just outside; Cheng’s spiritual bond to Splinter having led the ninja to the cemetery.

Down in the sewers, a badly malfunctioning Don has reached his secret lab and reactivates the imprisoned cyborg remains of Dr. Baxter Stockman. Don implores Stockman to help him, though Stockman has a price: he wants Don’s living nanite-infused metal. Don refuses, knowing Stockman will use it to resurrect himself, but the Turtle is running out of time.

Back at the mausoleum, Mike tries over and over again to call Sara “Horridus” Hill, but there’s no answer. Suddenly, Splinter senses the presence of enemies. Outside, Lady Shredder orders the strike to begin and several rocket launcher-toting Foot Soldiers proceed to obliterate the mausoleum.

Down in the lab, Donatello finally concedes defeat and willfully gives up his living metal to Stockman. As Stockman begins to reform himself, he lets the helpless Don know that they’re about to have “a little bit of fun”.