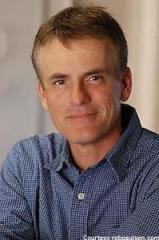 Robert Fredrick “Rob” Paulsen III (born March 11, 1956) is the regular voice actor for Raphael in the 1987 animated series up until the last season, when he was replaced by Michael Gough. Recently, Rob has announced he is voicing Donatello in the upcoming 2012 animated series. In total, Paulsen has been the voice of over 250 different animated characters and performed in over 1000 commercials. He continues to play minor parts in dozens of cartoons as well as supporting characters in animated movies.

Paulsen was born in Detroit, Michigan. He is married to Parrish Todd and has one son, Ashton. In an interview with a Chicago TV station, Paulsen described himself as “a singer who decided to become an actor.” Growing up in Grand Blanc, Michigan, Paulsen sang in choir throughout his youth and adolescence and began performing in plays in grammar school. However, his idol growing up was Gordie Howe of the Detroit Red Wings; he considered the arts to be a secondary career choice, primarily interested in becoming a professional hockey player.

Paulsen has long supported charity organizations, and donated considerably for cancer research. He has worked a lot for GOALmodels, a program for adolescents, and is a sponsor of Camp Will-A-Way, a camp for mentally and physically disabled children. Paulsen also donates funds from autographs to the Wounded Warrior Project and Operation Smile. He provided the voice of “Dog” in the Taco Bell kids meal commercials from 1996 to mid-1997, with Eddie Deezen as the voice of “Nacho” the cat.

He began his voice over career at Hanna-Barbera on The Smurfs animated television show as an extra in 1981. A few years later, his career launched into more substantial roles such as Tripwire, Cobra Slavemaster, and Snow Job on G.I. Joe and Corky on The Snorks. He had an impressive turn as the villain “Jesse Blue” in the series Saber Rider and the Star Sheriffs. The character has a bit of a cult following, due in part to Paulsen’s excellent portrayal.

During the 1980s Paulsen also explored the field of live action cinema. His first movie was Eyes of Fire in 1983. He played supporting roles in Body Double, Stewardess School, Mutant on the Bounty, and Warlock. He appeared in television shows during this time as well, such as MacGyver and St. Elsewhere. He mentioned in an interview, regarding his role in Body Double, that he would not want his child (who was very young at the time of the interview) to see the movie, so he could not really be proud of his work.

Paulsen’s first major role was in 1987, as “Raphael” in the Teenage Mutant Ninja Turtles television series.

Paulsen became more prevalent in the world of advertising as well. In the 1980s he had been the announcer for the sitcom Cheers and continued to secure roles as an announcer. He appeared as the voice of “Mr. Opportunity”, spokesman of Honda commercials on TV and radio, the announcer for Buffalo Dick’s Radio Ranch, and the spokesman for Lucky Stores, a West-coast grocery store chain, before it was acquired by Albertsons in 1998.

However Paulsen’s most famous advertising role was in the original commercial of the now ubiquitous Got Milk? campaign. The famous commercial, Who Shot Alexander Hamilton?, aired in 1993, and launched the Got Milk? campaign into a monstrously successful enterprise. Paulsen continues to be one of the most sought-after commercial voice actors in the industry.

He can be currently heard as the voice of singing Mini-Wheat in the Mini-Wheats commercials in Canada.

Tuning in to Spielberg

Throughout the early 1990s, Paulsen continued to co-star in animated series, which allowed him to branch further into radio and television announcements and dropped live-action acting from his repertoire. In 1993, he voiced “Antoine D’Coolette” in ABC’s series Sonic the Hedgehog, and “Arthur”, an insecure accountant in a moth costume (wings included), in the superhero series The Tick in 1995.

In 1993, he starred as the title character in both Mighty Max and The Mask. Also at this time he starred in what became one of his most popular roles, “Yakko Warner” of Animaniacs. Paulsen also provided the voice of “Pinky” from Pinky and the Brain, a show which won him several Annie Awards and a Daytime Emmy in 1999.

He also did a number of characters in Tiny Toon Adventures, including “Fowlmouth”, “Arnold the Pit Bull”, and “Concord Condor”. In the direct-to-video movie Tiny Toon Adventures: How I Spent My Vacation, he did the voices for “Banjo Possum”, “Mr. Hitcher” (who would also appear in other episodes), and “Johnny Pew”.

Paulsen has been a regular industry guest and featured panelist at Comic-Con International over the past several years. He has also appeared at animation industry-related events such as the World Animation Celebration in 1998, among many others. He has also been a guest at several anime conventions, including JACON, Mikomicon, and Anime Overdose. Paulsen was a guest of honor at Anthrocon in 2007. He has recently started doing “Rob Paulsen Live” seminars across the U.S. to talk of his career, sign autographs, and talk with fans. Paulsen’s first seminar was in Atlanta, Georgia. on July 30, 2011, and the next will be in Dallas, Texas on September 17th, 2011.

Sometimes people in attendance would request him to sing the famous “Yakko’s World” number, where he sings all the nations of the world with his “Yakko” voice in a fast-paced delivery without rehearsing.

In May 2011 working with social media and web producer Chris Pope, Rob rolled out a brand new website RobPaulsenLive.com as well as a weekly audio podcast called “Talking Toons with Rob Paulsen” which is managed and deployed by The Tech Jives Network.

June 2011 Rob made announcements that he was taking his show on the road with his “Lots of laughs and autographs” tour. Working closely with a team that included Chris Pope, his publicist and others he made his first successful tour in Atlanta, Georgia, which happened on July 30th 2011.