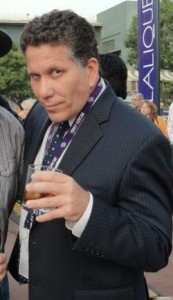 Peter Hill Lurie (born January 16, 1962) is an American television personality, Sports anchor and voice actor who has worked in several television shows, movies, and dubbed anime, since the mid-1990s. He is well known as the voice of Vulcan Raven in the Metal Gear Solid video game series, and the Marvel Comics supervillain Sabretooth. He currently works as an HRTV anchor and as an in-house host for Fairplex Park as well.

He is the voice of Leatherhead in the 2012 TV series.