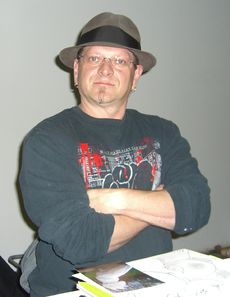 Mark Bodé (born February 18, 1963) is an American comic book author and artist. Bodé is best known for his work on Cobalt-60, Miami Mice and The Lizard of Oz. Bodé has also worked on Heavy Metal Magazine, and on The Teenage Mutant Ninja Turtles. Bodé is also a tattoo artist, spending many years working around Northampton, Massachusetts, although he now lives in California. He is also the son of the cartoonist Vaughn Bodé.

As a teenager Bodé worked on his father’s unfinished work titled “Zooks the First Lizard in Orbit” for Heavy Metal while attending The Art School in Oakland, California. In 1982, he attended The School of Visual Arts (SVA) in New York as a Fine Arts major. He also studied animation at San Francisco State University.

While attending the School of Visual Arts in New York, Bodé met Marvel Comics editor Archie Goodwin, who was starting up a new magazine called Epic Illustrated. Bodé became a contributor from 1982 to 1986. In 1983 he launched Cobalt 60. Originally created as a short story by his father, Vaughn, in 1968, Mark expanded and illustrated the story, which was written by Larry Todd in 1983. Todd was Vaughn’s friend and collaborator in the 60’s for Eerie, Creepy, and Vampirella magazines.

Later in Bodé’s career around 1986 he was the creator of the hit black and white comic Miami Mice printed by publisher Rip Off Press in San Francisco, the comic book sold over 180,000 copies in a year’s time and was considered one of the best selling independent comics of that year.
Bodé then ventured from 1988 to 1995 to write and draw comics with Teenage Mutant Ninja Turtles co-creator Kevin Eastman. The two collaborated on several issues for Mirage Studios, issue #18, #32, and special edition “Times Pipeline” of TMNT in which Bodé did solo. The Cobalt 60 saga was completed and was published as 4 graphic novels with Eastman’s company Tundra Publishing.