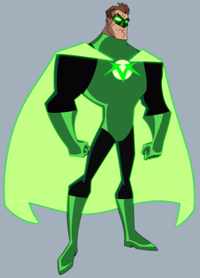 The Green Mantle was a title shared between three characters in Back to the Sewer.

The original Green Mantle, Al Gordon, fought crime in the 1960’s. He was bestowed a superpowered cape from an alien tailor; this cape allowed its wearer to fly, have super strength, use the cape as a transforming weapon, and many granted many other powers. During a battle with his arch-nemesis,Mechazoid, Green Mantle’s cape was knocked off from him, and found by a young comic book fan. Though he has lost his cape and powers, Gordon decided to continue helping others and joined the police force. After 25 years, he retired from the force and became a security guard. While working at a comic book convention, he attempted to stop a thief from stealing a cape from a collector (unknown to him at the time, it was his Green Mantle), but was knocked out by the thief, supervillain Dr. Malignus. Gordon was picked up by Stainless Steel Steve, where he explained his origins. Steve brought him back to the Justice Force’s headquarters just as the previous Mantles decided to give it up. Gordon decided to take up the Mantle once again and return to being a superhero.

The cape was behind glass as the prized possession of the boy who found it until present day, when it was stolen by Dr. Malignus at a Comic Book Convention. A security guard working at the convention chased down Malignus in an attempt to retrieve the cape, but was soundly defeated by the wicked doctor. Before he could use the cape, however, Raphael intervened.Michelangelo forced Raphael to wear it in attempt to make him the Turtle Titan’s sidekick, “Tortoise Boy”. Raph gained the powers of the cape and the costume it also bestowed. Michelangelo was jealous that his brother had superpowers, and he didn’t. Michelangelo made several attempts to steal the cape from Raphael, succeeding at one point, becoming the third Green Mantle very briefly. Eventually, Raph and Mike ripped the cape in half, and were able to use each half of the cape, with only half of the cape’s powers each. Dr. Malignus attacked, and the two brothers were forced to work together. Malignus weakened them with a yellow thimble from the planet in which the cape was made, and they threw the cape at him, weakening him. Following this event, the original Green Mantle mended and retrieved his cape.