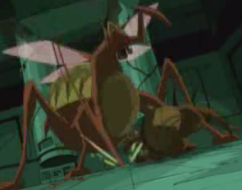 Like the rest of her species she seems to be similar to Earth’s Wasps and Hornets, albeit thousands of times bigger! Like the rest of her species she can be harmed by her own stinger, since she re-appeared in The Trouble with Augie after Leonardo attacked her with her stinger she could have been replaced by another queen or only briefly been out of commission. If someone or something disturbed her nest she would attack it, this is what happened to the Turtles and April and also, ironically, to the Brotherhood.