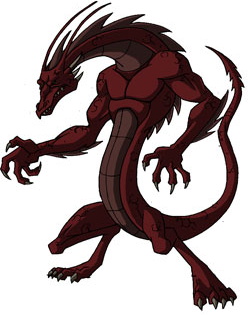 Drako is a red dragon. He was once one of the most feared fighters of the Battle Nexus. That is until Splinter defeated him. Later on he comes back for revenge on Splinter. He also wants the Ultimate Daimyo’s War Staff.

Drako once was a competitor in the Battle Nexus. But during the last round, he fought against Splinter. During the battle Splinter’s leg was injured, but he adapted and defeated the big lizard single footed. Drako was upset this loss and attacked Splinter with assassinswhen he was caught off guard. But Splinter was assisted byMiyamoto Usagi and the Ultimate Daimyo, who chased Drako and his assassins off with the War Staff.

Three years later, at the next tournament, Drako served as theUltimate Ninja’s councilor in exchange for the War Staff. He tried to advise the Ninja over the rash course of action to try to attack Leonardo but the Ninja was concerned with revenge. He poisonedLeonardo during the tournament, sending him to the medical ward with little knowledge of what poison was used. They also sent assassins to severely hurt the Damiyo, blame Splinter and install the Ultimate Ninja as Damiyo. However, the Ninja was planning on waiting for his full initiation as Daimyo, so Drako had to act. He tried to grab the War Staff but the Ninja anticipated the move and tried to use the Staff but had no knowledge to control it and it rejected him; Drako had been studying its ways and used it against its inheritor. But his dark heart caused the Staff to open a dimension wound that would destroy everything. Despite attempts to save them, Drako and the Ultimate Ninja fall into the rift.

However, it was not the end for both of them, for they had managed to survive and merged into Ultimate Drako, kept alive by their hatred of the Turtles. Eventually they learned enough to free themselves and ended up in 15th century Earth, disguised as a dragon pet toSavanti Romero. They waited for their opportunity, as Savanti sought the Time Scepter. Using a spell, Savanti brought the Scepter, along with the Turtles and Timestress Renet. Once Savanti gained a hold of the Scepter, Ultimate Drako strangely turned to stone. Only when Savanti was defeated did Ultimate Drako reveal himself, planning on using the Scepter to destroy their enemies. However, Lord Simultaneous was summoned, who froze Ultimate Drako in space and time. However, they were able to break free and snatch the Time Specter, promising that they will meet again.

Their promise prove true, when later, Ultimate Drako manifested in their Y’Lyntian lair, using the Time Scepter to freeze them. Ultimate Ninja wanted to destroy Leonardo, Drako reminds him that they agreed to take care of Splinter, then the Daimyo. Using the Time Scepter, they scattered the Turtles across time and space into different realities, alternate timelines, probable futures and dimensions, sent Splinter into the dungeons of the Battle Nexus and weakened the Daimyo.

Ultimate Drako posed as the Gyoji, who pretended to assist Leonardo, who had made his way to the Battle Nexus with the help of Usagi, giving him the War Staff to reach out to his family. All the while, Ultimate Drako was blocking his attempts, before they revealed themselves. With the most powerful objects that controlled time and space at their disposal, Ultimate Drako sent both Leo and Usagi to a dimension where they faced unending hordes of fierce warriors. As Ultimate Drako watches Leo struggle, he uses the War Staff to summon the Daimyo and Splinter. They then planned on exacting their revenge on the Damiyo and Splinter. However, the Ultimate Ninja still cared for his father and argued that they could send his father into exile. This moment of hesitation allowed Splinter to grab onto the War Staff. As they fight over possession of the staff, Splinter somehow activates its powers. Splinter summons his sons to him, and Raph, Mike and Don appear in a flash of green energy. The Turtles and Splinter separate the War Staff and Time Scepter. The latter object read everyone’s thoughts, with help from the War Staff, separated the Ultimate Ninja from Drako. They then both turned to stone and crumbled to dust. Though Lord Simultaneous gave the Ultimate Ninja a second chance as a child, he left Drako as he is.