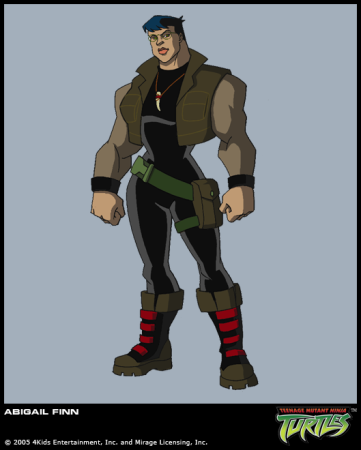 Doctor Abigail Finn is an expert monster hunter and gifted biologist and technologist from the 2003 TV series.

Biography
Dr. Finn has had a show called the Monster Hunter, in which she would try to hunt for monsters, along with her ball shaped SORTIES and her assistant Parker. However, not many people take her seriously and her desperation to find monsters made her deranged.

When Casey’s neighbor video taped Mikey in his backyard (luckily the footage was quite vague), Finn came to Jones’ farm to locate the monster and capture it. Mikey and Don try to retrieve the tape but accidentally get in the trap but get out before Finn could identify them. Along with Casey, they later disguised themselves as the famed Green Man to scare off Abigail but coincidentally, the Green Man was real and Finn captured it and alerted the press. But the Turtles was able to swap the Green Man with Casey and retrieved the tape. When the press arrived, Casey accused her of harassment as a result, her reputation was ruined.