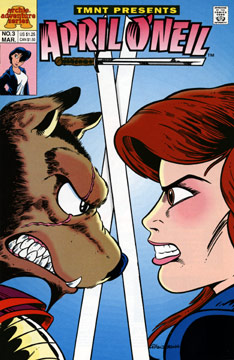 When Johnny Yen spots Chien Khan he asks why the dog man hasn’t joined him to take over New York City, but Khan has no love for the maniacal Yen. Chien explains his origin, how he was once a powerful member of the Golden Triangle until jealous underlings convinced Yen that he was a threat – so Chien and his dog were chained and locked up in an air tight shipping container – where they were supposed to perish. But Chien escaped his chains and used what spells he knew to summon a Japanese oni (a demon) named Noi Tai Dar to help him. The creature agreed to help Chien survive if he would help the beast cross over to Earth… Khan agreed, but to his dismay, the demon morphed Chien and his dog together and made them into a dog mutant. While the transformation was horrible, it did give Chien the strength needed to break open the container that held him. Chien Khan then set about trying to free the demon (TMNT Adventures #28-31) – but after those plans were foiled by April and the TMNT, he went back to New York and formed the Dog Star gang so he could seek retribution for what Johnny Yen had done to him.

After the story is complete, Johnny Yen transforms into a lion monster and attacks Chien – but the canine warrior is ready for the attack and hits Yen with a spell that drains his mystic energy and turns him into an old man. The demon orders his underlings to attack while it retreats into a tunnel. The Dog Star gang easily defeats the Golden Triangle and they take April and Oyuki hostage. As they follow the path Yen had taken, Chien explains that the real reason he is fighting the demon is to locate its source of power… and now it’s nearly in his grasp… literally! They enter a room, and the decripit form of Johnny Yen is reaching out for a goblet, but before the creature can grasp it, Chien Khan snatches it away. Chien knows that the goblet holds the power that allows Johnny Yen to transform – so the Khan wants to use it to change himself back into a human. Chien then kicks Yen into a pool of gasoline that incinerates him.

Chien Khan then explains to April and Oyuki that he plans to sacrifice them to demons in order to gain more power. Chien grants the two women one final request. Oyuki asks for a cigarette and April tells Khan to “go to the devil” – something that Chien is not eager to do. April struggles to come up with a plan when she notices Oyuki’s lit cigarette… and the pool of gasoline. O’Neil kicks the cigarette out of her friend’s mouth and it lands in the pool, setting off an explosion.

April and Oyuki escape to the surface and spot Chien Khan, who is about to drink from the goblet. April springs into action and knocks it from his hand, and it breaks on the ground. Chien Khan is infuriated and swings his sword madly at April, as Chu rushes to her aid. April tells her friend to fight the fire – she has this battle covered… and she does, as Master Splinter has taught her well! Chien Khan is no match for April’s swordsmanship, and he falls before her attack – but the dog man has other tricks up his sleeve, and he calls upon the dark arts. Unfortunately for Khan, he opened a portal that allows the demon Noi Tai Dar to seize him and pull him through! Once the dog man is gone, Chu asks April if she’s okay. O’Neil jumps into his arms, telling him that she’s fine as she plants a big kiss on his lips. Oyuki films April as she reports on the battle and fire.

Later that evening, April, Oyuki and Chu watch the broadcast. The bell rings and April answers the door to find her ex-boss, Murdoch Maxwell, standing there with a huge bouquet of flowers. Maxwell offers April her job back along with a substantial raise, but O’Neil angrily slams the door in his face. Back in the apartment, April, Oyuki and Chu make a toast to April’s new freelance career.