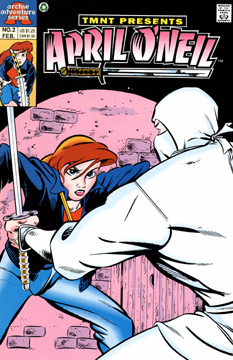 April and Oyuki follow the trail down into the sewers, and discover where the Golden Triangle resides. The gang members are arguing over the threat the Dog Star ninjas present when Wing Min spots Oyuki’s lit cigarette. The thugs leap into action – April tells Oyuki to go get help while she distracts the gangsters. April is captured and taken to see Johnny Yen – the Golden Triangle’s master. Oyuki tries to get Chu Hsi to help, but he’s upset that April ran off earlier and is too busy fighting the fire… thus Oyuki decides to try to find the Dog Star gang member who had been hitting on her earlier…

April is brought before Johnny Yen just as Oyuki arrives with a bunch of Dog Star ninjas. April dives for the video camera as a battle breaks out. As the fight escalates, Yen transforms himself into a gigantic spider monster and bites Kato. Oyuki attacks the beast and is quickly captured in its web, but April cuts the line before her friend is hurt. Johnny Yen returns to human form and grabs a sword to fight April… but before the battle can begin, the Dog Star Gang’s leader arrives… none other than Chien Khan (from TMNT Adventures #30).