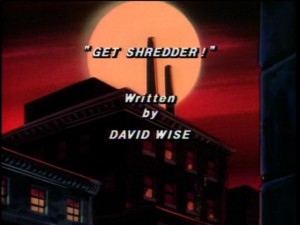 SYNOPSIS:
Over the police scanner, the Turtles pick up a report of a sudden break-in that is being perpetrated by characters whose descriptions match Shredder, Bebop and Rocksteady.
Meanwhile, Krang informs Shredder that the site of the old 1964 World’s Fair would make a great hide-out. Krang believes that the pavilion housing the Hall of Science might still contain equipment that they can use to conquer the world.
At the sight of the break-in, The Turtles find foot prints belonging to Krang’s Bubble Walker and a brochure for the 1964 World’s Fair. The TMNT hustle over to the site just as Shredder, Krang, Bebop and Rocksteady are about to take possession of the Hall of Science Pavilion, only to be greeted by laser fire from Berserko, the current resident.
Shredder takes off and Krang gets captured by the Turtles. When Berserko hears the name “Krang” he orders his Cyberdrones to remove him from the Turtles possession. Later, when Shredder realizes that Krang is missing, Bebop and Rocksteady tell him that they last saw Krang being grabbed by the Turtles.
Berserko reveals himself to be Drakus, the original designer of the Technodrome, who Krang had betrayed and left for dead. Drakus wants revenge.
Unfortunately Berserko’s annihilator is experiencing a mulfunction. Berserko threatens to fry Krang unless he tells him how to fix it. Krang reluctantly agrees.
Shredder plants an explosive device in the basement of Channel Six and threatens to blow it up unless the Turtles rescue Krang from Berserko. One minute after Shredder’s deadline the Turtles successfully rescue Krang. Relieved to see that the building is still standing, Raphael makes the mistake of suggesting that Shredder had been bluffing. With that, Shredder blows the building sky high.
Unbeknownst to Shredder and the Turtles, Splinter has already rescued April, Irma, Vernon and Burne just moments before.
The Turtles attack Shredder and company, defeat them and tie them up. Unfortunately, rather than deliver them to the police, they have to leave them so that they can stop Berserko’s Annihilator, which is now up and running, from destroying the City.
After successfully defeating Berserko, the Turtles escape with the new villain in tow as the Annihilator plunges into the river and explodes upon impact.
Back at the site of the former Channel Six building, the Turtles discover Shredder and company gone, but April and company alive. Unfortunately Burne blames the Turtles for the destruction.