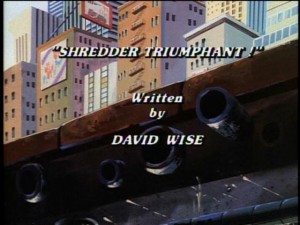 SYNOPSIS:
While watching April’s report live from the Asian Arts Museum, the Turtles witness Shredder, Bebop, and Rocksteady arriving to loot the place. But, as the TMNT head out of the sewer to stop Shredder, Splinter implores them not to go. He senses that there will be dire consequences should they try to stop Shredder.
The Turtles do not listen. They believe there will be dire consequences if they do not try to stop Shredder.
At the Museum, the Turtles defeat Shredder and company a little too easily. Back at the lair, the Turtles discover that they were set up. While Shredder, Bebop and Rocksteady were pretending to rob the Asian Arts Museum, Krang and the Foot Soldiers were stealing the Regenerative Power Cells (RPC) the world’s most compact source of energy developed for a new super space station, from the Space Administration Center.
Suddenly, Donatello’s early warning alarm system sounds indicating something massive just off the coast.
The Turtles rush out just in time to see the Technodrome rising from the sea and making its way toward the City. Now they know what Krang did with the RPCs.
The TMNT break into the Technodrome, get captured by Shredder and transported to Dimension X. Once again, the Turtles have been set up.
While Krang demands the surrender of the City, the Turtles have been rescued by Weesel, a Dimension X space pirate, who plans to sell the Turtles into the slave pits of Serot.
Back in the City, all Hell has broken loose, as Krang takes control of everything.
On Serot, in Dimension X, Weesel turns the Turtles over to Vorx, who immediately sends the Turtles off to the slave pits, where they befriend an alien named Zwerk, who just happens to be Weesel’s little brother. Suspecting that Vorx may have a Trans-Dimensional Portal, the Turtles and Zwerk plan the “great escape”.
However, before they can begin the first phase of their “breakout” Zwerk and the Turtles are caught and sentenced to death in the pit of the Great Chaarg. Weesel returns and saves them.
At Channel Six, Bebop and Rocksteady have become the new Head programmers. Splinter rescues April, Irma, Vernon and Burne. Splinter finds the location of the Turtles and Krang from the dim-witted mutants.
Back in Dimension X, the Turtles attempt to lead a revolt against the evil Vorx, but soon find themselves outnumbered. The TMNT trick Shredder into bringing them back out of Dimension X so that he can fight them.
After defeating Shredder, Donatello successfully programs the Trans-Dimensional Communicator aboard the Technodrome to open and allow it to slip through into Dimension X – with Shredder, Krang, Bebop and Rocksteady.