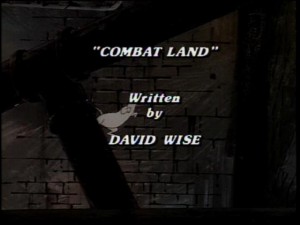 SYNOPSIS:
There is a new amusement park in town and it is called COMBAT LAND. So says the fliers that are being passed all over town inviting all comers to “test their skills against the greatest robot warrior in history and beyond” at tomorrow’s grand opening.
While covering the story of the grand opening of Combat Land, April, Irma and Vernon discover that there may be no grand opening until the robotic warriors have been fully tested. It seems that the park’s owner, Horatio Stressbar, has been unable to find anyone with the combat skills to give his robotic warriors a thorough work out. April, concerned about getting her story on the air, offers the services of the Turtles.
After being introduced to Mr. Stressbar and Denton Nulcet, the chief robotic engineer, the Turtles are informed that they will not be allowed to use their weapons in Combat Land. The Turtles reluctantly agree and are issued “safety” weapons to battle against the robotic warriors.
The Turtles immediately decide to split up as they independently check out the Shogun Zone, the Medieval Zone, and the Future Zone. Meanwhile, Irma is sure that this whole set up is weird. Unable to convince April of her suspicions, Irma sets out with her mini-cam to find the real story.
Sure enough, after being attacked with real weapons by robotic Samurais, robotic Knights and robotic cyber-warriors, the defenseless April, Leo, Don and Raph come to the same conclusion. Then, for no apparent reason, the robots stop attacking our heroes and begin a march into the City.
Meanwhile, Michaelangelo, Irma and Vernon are missing.
So, while Leonardo searches for Michaelangelo in the confines of the amusement park, Donatello and Raphael follow the robots into the City, while April investigates Horatio Stressbar’s past.
Along the way, Leo discovers Michaelangelo’s robotic twin and is taken prisoner, while Donatello and Raphael have just discovered that the Combat Land robots are walking time bombs and they are all headed for the sewers.
At the amusement park, Horatio Stressbar reveals that his plan to blow up the sewers is generated merely by greed. It seems that he is convinced the City will then have to pay him twenty million dollars to repair them. But it does not end there, Stressbar and Nulcet are also planing to destroy bridges, subways and buildings in order to acquire every major contract in the city.
Over at Channel Six, April verifies what we have just learned when she contacts Donatello and Raphael and tells them about Stressbar’s petitions for repairing the sewers.
Donatello and Raphael return to Combat Land, after Donatello successfully jammed the radio signal messages being directed to Combat Land robots. Donny rescues Leonardo, Michaelangelo, Irma, and Vernon, and they destroy the computers that control the robot warriors.