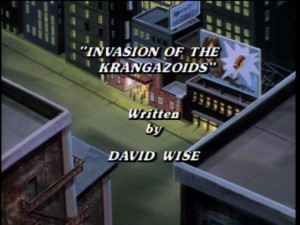 SYNOPSIS:
After bumbling another robbery attempt, Bebop and Rocksteady return to the Technodrome empty-handed. Krang is livid.It seems that he must do everything himself – but that is not possible. That is until he realizes that if he were to create clones of himself, he could do everything himself.
However, Krang ended up with six representations of different aspects of his personality, rather than six identical versions of himself. The clones immediately prove to be uncooperative – until Krang demonstrates to them who the boss is.
Meanwhile, Shredder is unable to come up with a plan (via his computer) to destroy the Turtles, and so he decides that April O’Neil might be the key to his triumph over his reptilian nemeses.
April and the Turtles investigate a break-in at the A-1 Scientific Company by something that sounds like Krang. They quickly encounter all six Krang clones, and execute a “bold and daring ninja maneuver” to make a hasty retreat.
Back at Channel six, Bebop and Rocksteady plant a “teleportation device” inside April’s camera in hopes that April will tape footage of the Turtles which would then “teleport” them to a pre-selected location – Shredder’s secret hideout at the City Zoo.
The only problem is that only one Turtle (Leonardo) and April were transported – leaving Donatello, Michaelangelo, and Raphael to figure out what is going on.
Meanwhile, Krang’s clones have developed hands, feet and bodies, thereby having little use for their Bubble Walkers – which means they are free of the real Krang’s control.
Krang’s clones, now known as Krangazoids, decide that they will create a thermal device, plant it under the City and re-create Dimension X here on earth. However, the Krangazoids cannot decide who shall be the absolute ruler.
Back at the City Zoo, Shredder contacts the Turtles via Leonardo’s TurtleCom and invites them to come rescue their friends. Donatello convinces the other two Turtles that they must stop the Krangazoids first.
When Don’s plan doesn’t work, Michaelangelo jokingly suggests hat they need the firepower of the Krangazoids’ Bubble Walkers. Donatello realizes that this is a brilliant idea and they set out to gather up the six abandoned Bubble Walkers from around the city.
When they arrive at the City Zoo, they easily defeat Shredder, Bebop and Rocksteady, rescue Leonardo and April, and place the teleportation device in the Transport Module.
Moments later, the Turtles are able to defeat the Krangzoids and transport them into the Transport Module. Krang pretends to send them home, but actually sends them into dimensional limbo.