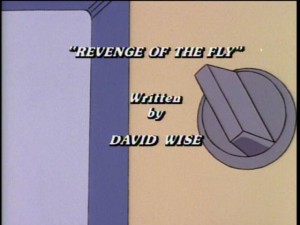 SYNOPSIS:
Thanks to Vernon’s irresponsible journalism, the Turtles find it necessary to stand guard at the Genetic Research Lab. The TMNT are protecting the Genetic Essences of numerous insects, as developed by a local research scientist – essences that were designed to create insects for specific purposes.
Meanwhile, in an attempt to open the portal to Dimension X, Krang opens the portal “to the place where he put Baxter Stockman.” And naturally, Baxter Stockman/The Fly comes “buzzing” out crying “I’m free! I’m free!” and takes control of the Technodrome. Baxter is determined to make Shredder and Krang pay for turning him into a hideously deformed mutant and to get his revenge on everybody in the whole wide world.
With the aid of Baxter’s alien computer buddy, he learns about the dangerous genetic substances as reported by Vernon only moments earlier. Baxter is hell-bent on “acquiring” these “dangerous genetic substances” to enact his revenge.
Back at the Genetic Research Lab, the Turtles, bored to tears, are called away to rescue April atop a burning building. No sooner do they leave, than Baxter Stockman/The Fly arrives and does the dirty deed.
While Baxter Stockman/The Fly flies over the City looking for something to mix Krang’s mutagen with the “genetic essences of insects”, he spies a fireman dousing the flames of the EMF Building, the site of April’s recent rescue by the Turtles, with a Super-Slosher 2000. Baxter is convinced that this is just what the doctor ordered and is proven right when he turns the “fearless firemen” into giant “fear inducing Termites”.
Baxter Stockman/The Fly’s next target is the local carnival. Within minutes every human in the place has become an insect – an insect with a voracious appetite. So naturally, when the Turtles arrive on the scene, they have no idea that they are beating innocent victims – that is until the alien computer (left behind when Baxter flew off to “transform” his next set of victims, spills the beans that Baxter is at Channel Six).
But when April and the Turtles arrive, they discover that they are too late. Irma has been turned into a moth, Vernon has been turned into a spider, Burne has been turned into a bee, and the interior walls of Channel Six are now honey-combed.
After a series of misadventures, the Turtles capture Baxter Stockman/The Fly. But in the process, the converted Super Slosher 2000 is broken and now the only way to turn all of Baxter’s victims back into humans (including April, who is now a wasp) is to borrow Shredder’s Retro-Mutagen ray, which he coincidentally had just repaired at the beginning of the first act.
After another series of misadventures down in the Technodrome, the Turtles destroy the alien computer, send Baxter back to the place he came from, obtain Shredder’s Retro-Mutagen Ray gun and return back to the City where they turn everyone back to normal – or normal as they ever were, and destroy Shredder’s device.