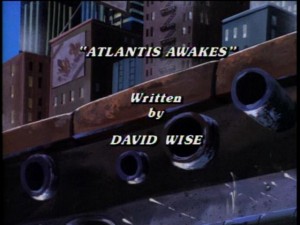 SYNOPSIS:
While surfing in the white water rapids of the sewer, Michaelangelo is rescued by Merdude, a half-man/half fish from the lost city of Atlantis.
Merdude left Atlantis over 200 years ago in search of others of his kind – it seems that Merdude is the only mutant in the lost city. But now he has lost his way and the Turtles, using Donatello’s Porta-Tracker, volunteer to help him find his way back home.
Meanwhile, aboard the Technodrome, Krang’s computers are picking up some low-level energy readings emanating nearby. With the Technodrome’s power reserves at an all time low, Krang thinks it would be prudent to investigate.
Shredder, Bebop and Rocksteady, using a much faster Transport Module for the required reconnaissance work, quickly discovers the legendary lost city, and as luck would have it, the Atlanteans believe that Bebop (that’s right, Bebop!) is their long lost King. It seems that the Atlanteans have been waiting generations for a strange creature to come from the sea to reclaim his throne, thereby fulfilling their age-old prophecy.
But Hepax Lagamina, a young and beautiful Atlantean woman, comes forth and declares that Bebop could not possibly be their king. Hepax insists that the true king would be a water breather and Bebop is a pig! Quick thinking Shredder jumps into the fray and suggests that as king, Bebop should order the traitor to be “clapped into irons” and so she is.
By the time Merdude and the Turtles arrive, Bebop, in all his regal finery, is ensconced upon the throne and once again issues the “clap in irons” orders, but Merdude and the TMNT disappear back into the sewers beneath the city of Atlantis.
While Bebop enjoys his new role, Shredder and Rocksteady discover the Star of Atlantis, the largest jewel they have ever seen. Shredder contacts Krang, who insures them that this jewel is exactly what they need to use as a focusing crystal and turn the Technodrome’s main cannon into the most powerful heat ray in the universe. Realizing that it is too large for just the two of them to carry, Shedder convinces King Bebop to deploy his subjects in the endeavor.
Hepax convinces Merdude to challenge Bebop to meet him in the Atlantean arena. Merdude uses his telepathic powers to call upon his friends of the deep. The area is filled with all kinds of aquatic life. Merdude wields the Trident of Power and Bebop quickly renounces his throne.
Meanwhile, Shredder steals the Star of Atlantis but the Turtles get it back and return it to Atlantis. Merdude is named King.