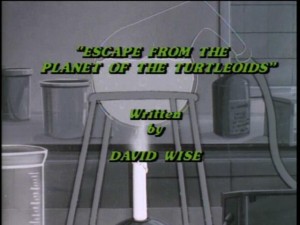 SYNOPSIS:
The Turtles visit April at Channel Six News and ask her if they could use the stations’ equipment to contact their old Turtleoid buddy, Kerma, on Shell-Ri-La. April informs them that the necessary equipment is all tied up and that the only time they could use it would be at four in the morning, after Channel Six has gone off the air.
Meanwhile, down in the Technodrome, Krang is up to his old tricks again. After discovering an unbelievably powerful solar storm, he has devised a way to supply energy to the Technodrome. It seems that the antenna of the Colossus Building, located in The City, is made of a rare alloy that soaks up energy like a sponge. It is Krang’s intent to turn the Colossus Building into a massive solar collector and, by running a cable between it and the Technodrome, enable it to become full powered again. Just to make sure that the Turtles do not interfere with his plans, Krang had three Hunter Drones drop-shipped from Dimension X to keep the reptiles busy.
Back at Channel Six, while the Turtles wait to use the stations equipment, who should drop in announced – you guessed it! Kerma! That’s right! Kerma has arrived in his Chrysler Building Rocket Ship with a small problem – one that he explains to the Turtles on their trip back to Shell-Ri-La.
No sooner do the Turtles leave with Kerma, then the Hunter Drones arrive at Channel Six, “loaded for bear” and destroy the place searching for their pre-programmed prey.
On Shell-Ri-La, Kerma’s small problem appears to be four malfunctioning robots that Kerma built to protect the Turteloids and he had hoped that Donatello could repair them. As it turns out, these four robots look just like Leonardo, Michaelangelo, Raphael and Donatello – only made of 24 karat gold and twice as big.
While Donatello begins his repair work on Kerma’s “heavy metal scaredy cats”, Leonardo, Raphael and Michaelangelo acknowledge that maybe Kerma’s small problem really is just a small problem and decide to check out the sights. That is until Groundchuck, Dirtbag and Captain Dredd, the most feared brigands in the whole galaxy, arrive to liberate Kerma’s little old gold machine. After a senseless battle, Captain Dredd, Groundchuck and Dirtbag kidnap Kerma and take off in their spaceship.
Back on earth, convinced that the Turtles have been destroyed by the Hunter Drones, Krang claims that the City is as good as theirs as he leads Shredder, Bebop, Rocksteady and the Foot Soldiers to the Colossus Building.
Meanwhile, Donatello is uncertain about his ability to repair Kerma’s robots, but is pretty sure that he can rig Shell-Ri-La’s damaged Force Field generator to protect the Turtleoid Gold Making machine. No sooner does he accomplish this task then Captain Dredd’s ship returns, but instead of Captain Dredd, out walks Kerma. It seems that he was pushed just too far and he decided to escape.
The Turtles think that maybe Kerma is ready for some ninja training, but before he is able to master any of the moves, Captain Dredd, Groundchuck, and Dirtbag do return – with company BRUTE FORCE to be exact – four identical giant aliens!
Donatello is still having little success with Kerma’s robots as Leonardo, Michaelangelo, and Raphael are getting their butts kicked by the Brute force “quads” while Captain Dredd, Groundchuck, and Dirtbag start tearing the golden city apart. Kerma’s blood boils again and he joins in the fray, demonstrating an uncanny martial arts ability.
After successfully foiling Captain Dredd and company, Kerma returns the Turtles back to Earth where they successfully foil Krang and Shredder’s latest scheme.