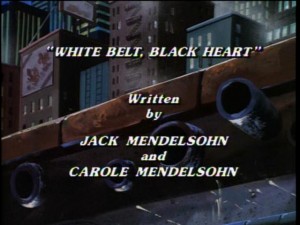 Synopsis:
While deep in meditation, Splinter is contacted telepathically by his sensei, Master Mogo-San who requests that Splinter meet him at Pier 17, where he will be arriving later that same day. Splinter dutifully agrees.
Meanwhile, across town, the notorious Black Heart ninja gang, led by a young man named Yoku, has been robbing The City’s banks and garnering the attention of Shredder and Krang, who want to put the Black Heart gang to work for them.
At Pier 17, Mogo-San arrives and is surprised to find Hamato Yoshi is now a rat. Splinter promises to explain it all, but first he wants to know what brings his sensei to America.
Mogo-San explains that he has arrived to pass on the sacred white belt of the Mogo clan to his grandson Yoku and that he needs Splinter help in locating him. This Yoku fellow was once a student of Splinter’s and is the same Yoku who leads the infamous Black Heart gang.
Splinter takes Mogo-San back to the sewer-lair and introduces him to the Turtles, who are most eager to accommodate him by helping Splinter search for Mogo-San’s grandson. But alas, Mogo-san is very distressed to learn of the dishonor Yoku bears upon the family name.
While covering the break-in of a jewelry warehouse by the Black Heart gang, April spies Shredder, assumes that he is a part of it and contacts the Turtles, via her TurtleCom, to inform them.
But when she meets with the Turtles, they forbid her to come with them and refuse to tell her what is going on. Naturally, as a reporter, this gets her angry. She decides to follow the Turtles to see why they are being so secretive.
Shredder finally catches up with Yoku and the Black Heart gang and immediately strikes a deal. Yoku and his boys are to break-in to a certain Government building and steal some top secret nuclear testing site maps. In exchange for this, they will receive an armory of Dimension X weapons. After a simple demonstration, Yoku agrees.
No sooner have they shaken hands on this agreement when Splinter and the Turtles arrive. Shredder manages to escape, but Yoku is taken prisoner and delivered back to the lair, and to his grandfather. Mogo-San shares his disappintment with Yoku and asks Splinter to burn the sacred White Belt — better for it to be consumed by flames than dishonered by Yoku. Splinter reluctantly agrees and after a moment, the lair fills with smoke, allowing Yoku to escape during the confusion. Unfortunately, he does not escape from April, who just happened to be driving by at the same time as Yoku emerges from a man hole cover. She follows him in her van, as he meets up with the other members of the Black Heart gang, only to be taken prisoner when they catch her snooping on them. The bad ninjas force her to become the driver of their get-a-way car in their theft of the Top Secret government maps.
While Splinter accompanies Mogo-San back to Pier 1 to return home, the Turtles rescue April and capture the real leader of the Black Market gang, Mr. Crocker, the Mid-City bank president.
It seems that Yoku is a secret government agent assigned to infiltrate the Black Heart gang in an effort to gather evidence against them and flush out their leader. The Turtles are able to deliver Yoku to Pier 17 before Mogo-San’s boat departs so that he can tell his grandfather the truth.
Mogo-San is indeed relieved to learn that Yoku is an honorable man, but saddened that he can no longer pass on the sacred White Belt. Splinter then reveals that he had never destroyed it. Splinter was never convinced that Yoku was anything less than honorable.
Meanwhile, Shredder is stuck in the Gobi Desert when he learns that Top Secret government maps are phonies.