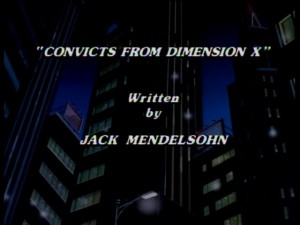 Synopsis:
Thanks to a malfunction in Donatello’s Inter-Dimensional Early Warning Detection Machine, a tear has occurred in the fabric of space and time, allowing two heinous criminals from Dimension X, Skaarg and Dementor, to arrive in The City – Times Square. Unfortunately, both Irma and Vernon, who are working together on a story and just happened to be in the neighborhood, disappear as Skaarg and Dementor arrive.
It does not take long for Skaarg and Dementor to realize that they could rule the world, but first they must recruit some more help from Dimension X
Back in the Dimension X Penitentiary, Vernon panics as he and Irma find themselves behind bars.
Meanwhile, April investigates the disturbance in the Inter-Dimensional rift and comes face to face with Skaarg and Dementor. She successfully eludes them and runs into the Turtles, who in turn challenge the DimensionXers – in vain.
But before they “leave the scene of the crime”, Skaarg overhears Donatello talk about his Inter-Dimensional portal IDP and realizes that this is exactly what they will need to bring over their troops.
Later, at the Lair, Skaarg and Dementor arrive unexpectedly, imprison the Turtles in a force field and activate Donatello’s, “primitive by Dimension X standards”, IDP. Within moments, the Dregma Brothers have arrived on planet Earth.
After a McGuyver-esque escape, Donatello begins work on the IDP, preparing it to send the Dimension Xers back, while Leonardo, Michaelangelo and Raphael team up with April and dash over to the National Guard Armory where they deduce that the convicts from Dimension X might be heading.
But before they can get there, they encounter Skaarg, Dementor, and The Dregma Brothers in a modified flying tank, constructed from various military equipment liberated from the National Guard Armory.
When they contact Donatello for help, he informs them that he is ready, but that they must lead the Dimension Xers to the exact same spot they entered our dimension — if not Donatello’s IDP could create the “mother of all vortexes”.
With little other choice, Leonardo, Michaelangelo, and Raphael run toward Times Square, with Skaarg, Dementor, and the Dregma Brothers in hot pursuit.
At the appointed place and time, the Dimension Xers are sucked back into Dimension X while Vernon and Irma are sucked out.