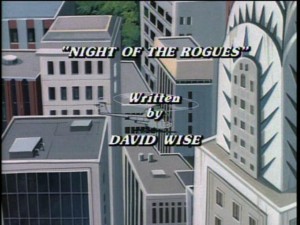 SYNOPSIS:
Krang, Shredder, Bebop and Rocksteady break-in to the City Hall of Records and steal a file of maps of The City’s sewer system dated 1895. Before they are able to escape back to the Technodrome, they get their collective butts kicked by the Turtles.
Licking his wounds in the safety of the Technodrome, Shredder blames Bebop and Rocksteady for his failures, vows vengeance against the Turtles, and decides that while Krang begins his excavation project in the City’s sewers (in hopes of discovering a source of treasure) he will be busy recruiting his new minions (to replace Bebop and Rocksteady who have been locked in a room to keep them out of harm’s way) to help rid himself of the Turtles once and for all.
Concerned and confused by Krang’s interest in the sewer system, the Turtles set out to investigate, only to quickly encounter Shredder and his villains and former foes, recruited to terminate the Turtles: the Rat King, Slash, Leatherhead, Temptesstra, Scumbug, Anthrax and Chrome Dome!
After the Turtles get their butts kicked, they do what they should have done in the first place – run away. Convinced that they will never find them in the sewers, Shredder’s Rogues Gallery decides to lure the Turtles out into the open by destroying the City. It works — even though the Turtles know that this is exactly what the villains were planning.
The Turtles are captured and about to be “disintegrated” but with only minutes to spare, they are rescued by Splinter, Irma, April, Casey Jones and Zack the honorary “fifth” turtle.
Meanwhile Krang has unearthed the prize he has been looking for – the Star Ship of the legendary space pirate, Captain Logos. It seems that Captain Logos crash-landed his ship on Earth one thousand years ago, and just as Krang has suspected, it is filled with the space pirate’s booty – riches beyond imagination, plundered from every corner of the galaxy.
However, before Krang and Shredder are able to “transport” Captain Logo’s Star ship back to the Technodrome, the Turtles arrive on the scene, and using Shredder’s Disintigrator, which was designed to destroy the Turtles, the space pirate’s ship is blown to smithereens.
Naturally, Shredder’s rogues are angry that they will not be getting paid and give chase to Krang and Shredder, who are then rescued by Bebop and Rocksteady who have broken out of their imprisonment because they feared that Shredder needed their help.