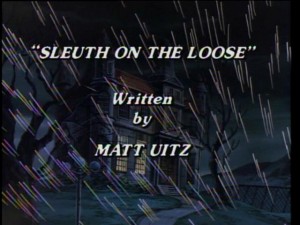 Sleuth on the Loose

While the Turtles are watching their favorite TV show “SLEUTH ON THE LOOSE”, which stars April’s Aunt Agatha, April interrupts the broadcast with a special bulletin about a break-in at Dynamic Science Labs.

The Turtles rush over there and agree to guard the remaining objects, which have not been stolen – yet. But somehow, while the Turtles were just outside the room that housed these objects another one disappeared – yet no one had entered the room from outside and the surveillance cameras picked up no one from inside the room. They seemed to have literally disappeared.
The Turtles agree that maybe they should take the one remaining object back to their lair, where no one knows where it is. Dr. Webb, director of the Dynamic Science Labs, reluctantly agrees, warning them that if it should fall into the thief’s hands he could construct something of unspeakable horror.

But while the other Turtles are out “beating the bushes” looking for clues, Michaelangelo is responsible for guarding the object. Suddenly the TV set picture scrambles and a light beam emanates from the set, enveloping the object and sucking it back into the TV set.

When the other three Turtles return, Michaelangelo has to explain that it is gone and to make matters worse, April contacts them and tells them that she has discovered that all the stolen objects put together could make a DOOMSDAY DEVICE but without the one piece that the Turtles are guarding it is worthless.

Without trying to panic, the Turtles try to solve the disappearance in the same way their favorite TV detective, Aunt Agatha, would. Donatello deduces that the thieves used a Molecular Disintegrator beam to teleport the objects across the airwaves.

Donatello builds a device that will transport them along the same signal to whoever it was that stole the objects. Only it does not work. In fact, it had the exact opposite result and transported Aunt Agatha from “SLEUTH ON THE LOOSE” television show into the Turtles’ lair. After explaining the premise of this week’s episode, Miss Agatha agrees to lend her services.
Meanwhile, Professor Von Volt, the man responsible for the thefts from Dynamic Science Labs, is aware that someone is trying to home in on his Molecular Disintegrator beam and tracks the energy surge back to the Turtles’ lair. He decides to send his two henchmen, Knuckles and Garth to take care of the interlopers.

When it looks like its curtain’s for everyone, Miss Agatha pulls a nail from her purse and deactivates the “death machine”.