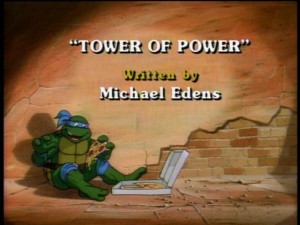 The Turtles and Splinter win a trip to Europe… but wind up riding in a crate with the Turtle Van. Once ashore they head for Paris.

Meanwhile, Krang devises a giant electromagnet to pull the Technodrome free of its dinky Dimension X asteroid, using the Eiffel Tower in Paris as a giant antenna. In Paris, the Turtles and Splinter wind up touring the sewers… not their idea of a sightseeing tour. April, Vernon and Irma are also in Paris covering the Bastille Day celebrations, when Shredder, Rocksteady and Bebop arrive, wire the Eiffel Tower and throw the switch — instantly magnetizing it and pulling everything except the Technodrome into it! The Turtles rescue April and the others, then — not knowing the cause of the magnetism — continue their sightseeing.

Meanwhile, Shredder again hits the power generator switch… and the Eiffel Tower begins to be pulled loose from its foundations toward the portal! Just in time, Donatello destroys the generator, and the Tower plunges back onto its foundations.