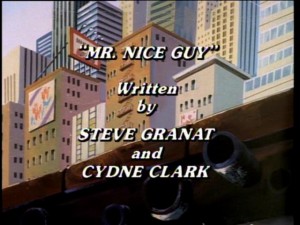 It is sweeps week and Burne Thompson assigns April a story reporting on the increase in urban crime. The only problem is that urban crime is decreasing… or so she thought, until she had her Channel Six van stolen right from under her nose!

Meanwhile, ever the crank and even more so on his birthday, Raphael accidentally blasts himself with one of Donatello’s many inventions while ironing his laundry. Whatever this device is, it has turned the usual foul-mooded Raphael into a charming, friendly, always willing to lend a hand Turtle.

The other guys are confused by Raphael’s sudden change of attitude, but are reluctant to look a gift horse in the mouth.

Over at the Crosstown bank, the stolen Channel Six News van crashes through the front doors, and Max, a typical cartoon punk and his partner in crime, Iggy, make an early withdrawal.
As chance would have it, the Turtles are out on a pizza run and happen to be near the Crosstown Bank as it is being robbed, and while Leonardo, Donatello, and Michaelangelo are trying to thwart the bank robbers, Raphael is actually helping them!

After a series of misadventures during the apprehension of the bank robbers, the other three Turtles agree that perhaps Raphael needs to see a psychiatrist. So the TMNT send the good-natured Raph off to the Von Shrink Institute of Mental Health, where Dr. Otto Von Shrink himself personally treats him.

Dr. Von Shrink regresses Raphael back to the time he first became “Mr. Nice Guy”. Dr. Von Shrink learns of Donatello’s Personality Alterator. The quack realizes that he could make millions from Don’s gadget and also get revenge on the psychiatric community, so he asks the ever obliging Raphael to bring it to him.

Back at the lair, Donatello accidentally discovers why Raphael is all smiles, but as he shares this bit of news with Leonardo and Michaelangelo, Raphael exits the lair with the Personality Alterator.

Later that night, after a series of rash crimes are committed all over the city. All of the eyewitnesses described the perpetrators as “nice guys”, so the Turtles realize that someone is using the Personality Alterator for nefarious gains. It does not take them long to put Raphael, the Personality Alterator, and Dr. Von Shrink together before they hustle over to the Von Shrink Institute of Mental health where they are immediately trapped in Dr. Von Shrink’s Phobia Chamber, a place where they must battle their worst nightmares!

Unable to convince Raphael that Dr. Von Shrink really is a bad guy, Donatello is able to use his Bo to throw the switch on the Personality Alterator from “very nice” to “very nasty” and we witness Raphael being zapped again. Now that he is back to his old self, he stops being Mr. Nice Guy. Raphael turns the Personality Alterator ray on Dr. Von Shrink, who immediately becomes a mild mannered therapist.