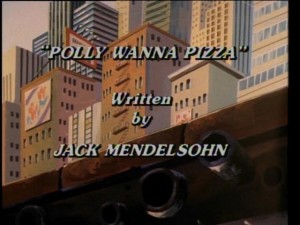 Michaelangelo returns from his sojourn to the pet shop with a monkey named Clyde, much to the chagrin of the other Turtles. After only a few minutes with the undisciplined pet Leonardo, Donatello and Raphael demand that it be returned to the pet shop.

Meanwhile, Burne Thompson has assigned April an interview with the notorious Mugsy McGuffin, a mob boss responsible for the theft of the Galoobie Ruby. It seems that Mugsy is being paroled after 15 years in prison and Burne thinks that because April will be the first women he will lay his eyes on in all this time, he will give up the location of the stolen jewel.

Unbeknownst to both April and Burne, Vernon plans to scoop April out of her story by arriving at the State Prison first.

On the other side of town, while Mugsy’s henchmen, Boris, prepares for Mugsy’s homecoming, he accidentally spills black paint on Mugsy’s pet parrot and quickly delivers it to Ralph’s Rent a pet for quick cleaning. And of course as luck would have it, Michaelangelo, unable to get a refund for the chimp, exchanges it for a parrot. And as luck would have it, Ralph now has two identical parrots and is not sure which one he sold to Michaelangelo and which one he returned to Boris.

No sooner does Mugsy arrive home, he discovers that his parrot is not his parrot! How does he know? Because he had hidden the key to a vault, where he had stashed the Galoobie Ruby around Polly’s neck, inside her tuft of feathers. And now the key is gone.

Meanwhile, Michaelangelo arrives back at the lair with the real Polly, now known as “Ditto”. The other Turtles assume that Ditto will be safe and not cause the kind of damage that Clyde had. Of course, they soon learn that they were mistaken.

Back across town, Mugsy learns that someone with a “green face” has the real Polly and that the Bering Arms Hotel, site of the locked vault with the stolen Galoobie Ruby is about to be demolished. Mugsy has to find that key.

But again, as luck would have it, the Turtles have found the key and Donatello uses his Key Analyzer Spectroscope to determine what the key is for.
Desperate to find the key, Mugsy contacts April and offers her an exclusive interview at his secret hideout. Vernon overhears her conversation and races to the location in an effort to, once again, beat April out of her story.

Only Mugsy uses April and the media to find Polly by pretending to be heartbroken over her disappearance.

However, Burne Thompson is none too happy about April’s use of the airwaves and sends her over to the Bering Arms Hotel to cover the demolition.

Michaelangelo once again returns his beloved pet to Ralph’s Rent-a- Pet, the other Turtles learn the identity of the key and the identity of Polly. They rush to Ralph’s to prevent Michaelangelo form returning Polly only to learn that he is trapped at the Bering Arms Hotel before the other and recover the Galoobie Ruby. But, after the usual third act shenanigans, the Turtles have only enough time to rescue Michaelangelo before the building blows, causing the sky to rain ruby confetti as Mugsy is hauled away to jail.