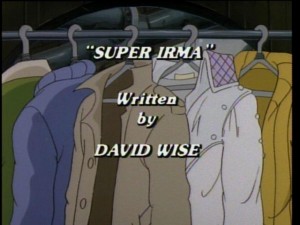 SYNOPSIS:
While the Turtles are busy trying to decide what costumes to wear to this year’s Channel Six Halloween party, April and Irma are doing a story on the “reverse polarity magnet” at Magno-Dyne Labs. While at the Labs, Irma falls into some “goop” that the good Professor Chumley describes as harmless. Nonetheless, she feels ill and goes straight home.

Meanwhile, inside the Technodrome on the Arctic Ocean floor, Krang and Shredder watch April’s broadcast and decide that the “reverse polarity magnet” device is just what they need to rule the world.

Later that night, Shredder, Bebop and Rocksteady break into Magno-Dyne Labs and attempt to steal the Professor’s invention. As fate would have it, Irma is walking by in her Halloween costume, which looks like Wonder Woman’s in design. As she passes by, Irma is accidentally “zapped” by the magnet device when Bebop accidentally turns it on.

When Shredder and company try to “take care” of Irma, they find themselves being “taken care of,” as Irma inadvertently displays super powers.

Later, on the way home from the party, Irma tries to convince both the Turtles and April of her new found powers. No one believes her, until April and Irma separate from the Turtles and are confronted by two muggers in a dark alley.

April and the Turtles become believers as they witness Irma’s spectacular super powers. But Irma is now out of control. She sees herself as the new crime fighter in town and is determined to right all wrongs. Fortunately, Donatello planted a tracking device on her before she fled from the alley in pursuit of evil-doers everywhere.

So our intrepid heroes follow Irma around town, all night long, saving herself from herself, that is until the inevitable happens — Irma, finds herself trapped inside a Transport Module, with Shredder, Bebop, Rocksteady and the “reverse polarity magnet machine,” headed for the Technodrome.

The Turtles learn that Irma’s super powers will wear off in five minutes. Meanwhile, Krang tests the “reverse polarity magnet” machine on a battleship, doing target practice on a mothball fleet in the harbor, by lifting it out of the ocean and flying it across the city skyline.

With a flip of a switch, the Turtle Van becomes a Turtle Sub and the TMNT race to the Technodrome, rescue Irma, and gently put the battleship down on a busy thoroughfare.

Donatello then rewires the controls to turn the “reverse polarity magnet” machine into a regular magnet machine — which means the mothball fleet will be pulled down under water and drawn toward the Technodrome, destroying it.