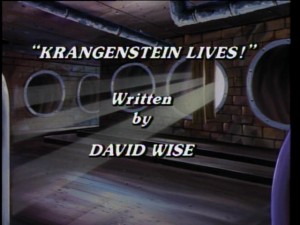 SYNOPSIS:
Down in the sewers, while the other three Turtles are busy practicing their ninja arts training, Michaelangelo is busy playing computer video games.

Meanwhile, under the Arctic Ocean, while Bebop and Rocksteady are also busy playing video games, Krang is tuning up his Robotic Body.

And while no one is looking, Bebop and Rocksteady inadvertently destroy an important computer chip and surreptitiously replace it with one from a hand held computer video game player.

However, upon arrival, Shredder falls down a big hole, knocks himself out, and temporarily loses his memory.

Krang’s Robotic Body is on the loose, destroying everything it its path in its quest to win the “game.”

Later, thanks to Bebop and Rocksteady’s “loose lips,” the Turtles learn the truth about Krang’s Robotic Body and track it down. The Shredder, still uncertain of who he is, takes a job with Barney Mushnik, proprieter of The Big Bang — a fire works company. Shred-head, not knowing exactly why, decides to build a bomb and then uses it to hold the city for ransom.

Vernon Fenwick, in one of his vain attempts to beat April out of her story, arrives on the scene with camera in hand and accidentlly causes Shredder to fall down the City Hall steps — thus causing Shredder to regain his memory and quickly assume his old Turtle-hating persona.

After doing battle with Krang’s Robotic Body, which changes size in the blink of an eye, Michaelangelo wires his video game player to the robot, takes control and saves the City.