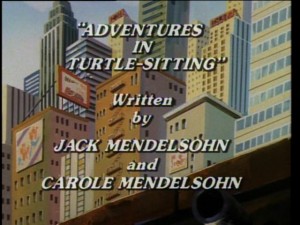 SYNOPSIS:
While Splinter is away on meditative satori, Donatello sets his sights on solving world hunger. He invents the “Food Revivafiver”, a device designed to reverse the aging process of food.

However, Michaelangelo accidentally zaps the other Turtles with the device and Donatello fears that it may have devastating effects on them.

Back at the Turtles lair, Donatello, Raphael, and Leonardo are shrinking down to Turtle Babies.

When April contacts the Turtles about the break in at the Government Weather Station, the three baby Turtles can’t wait to get there and punch Shredder in the nose. They all climb on one skateboard and race across town with a frustrated Michaelangelo in pursuit. However, when they arrive, Shredder, as stated earlier, is already gone and Michaelangelo and the three Turtles Babies prove to be no match for Bebop and Rocksteady. Later, while April continues on her story and Michaelangelo returns to the lair to search through Donatello’s notes for an antidote, Irma is left to baby sit Donatello, Leonardo and Raphael.

Meanwhile down in the Technodrome, Krang reveals this episode’s scheme. It seems that the villain plans to use the helium-filled weather balloons to support a man-made bogus island, a place where Krang intends to lure the city’s top criminals with a bogus treasure map. When they all gather on the island, Krang will release the tether that secures the island to the Technodrome, and all of his competition will float off in to space.

Only once again, Krang’s plans are foiled, as April is reassigned. Burne sends her out to the mysterious tropical island where the leading underworld figures have beeen spotted.

Michaelangelo decides to go with her, and to the surprise of both of them, so do the three baby Turtles. During a skirmish, Donatello, Leonardo, and Raphael escape into the ocean, where, lo and behold, the salt water transforms them back into their natural states. They are now ready to go back and kick butt.

Shredder and company retreat back to the Techndrome and April contacts the police to pick up the city’s crime lords.