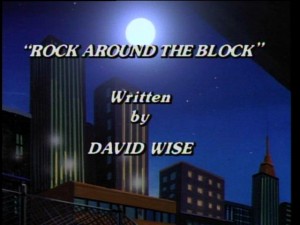 ROCK AROUND THE BLOCK

SYNOPSIS:
Krang summons General Tragg from the Dimension X to keep the Turtles busy (with a Rockolizer – a device that “vitalizes” anything made of mineral – i.e. turns inanimate rocks into animate rocks) while Shredder places a remote control transmitter upon a rocket ship preparing to launch a satellite with a new Super Laser. It is Krang’s intention to steal the Super Laser and uses it to free the Technodrome from its arctic prison.

While rushing across town to cover a report of “rocks going wacko”, April gets trapped in her van, almost falling into an enourmous crater left by a boulder which exploded out of the earth. The Turtles rescue her. Fortunately, April had contacted the Turtles before heading off to the Central City Park – site of the “wacko rocks.”

Meanwhile, Shredder arrives at the launch site and prepares to attach Krang’s remote control device onto the Super Laser.

Back across town, the Turtles and April come across General Tragg and realize that Krang and Shredder must be up to no good again. While the Turtles attempt to do battle with General Tragg, April borrows the Turtle Van and heads back to Channel Six for more video tape to capture the “story of the year.” But General Tragg tires quickly of the Turtles’ feeble attempts to capture him and, using his Rockolizer, creates a Giant Rock Monster and sends it chasing after the Turtle Van – thinking they are still inside.

The Turtles arrive at the Channel Six building and lure the Giant Rock Monster away to a nearby construction site before it can destroy the building with April inside.

Meanwhile, Krang is getting anxious as liftoff time is fast approaching and Bebop and Rocksteady have still not attached the remote control device to the Super Laser.

Before the Turtles can capture him, Krang returns General Tragg back to Dimension X.

As the Turtles start to celebrate their victory, April comes rushing into the scene to tell them that there is more trouble with the Super Laser that just was launched. Somehow, she got wind of Shredder and Krang’s scheme.

The Turtles race to the launch site but are too late. Krang has control of the Super Laser and is able to free the Technodrome from its icy prison.

Unfortunately for the bad guys, Bebop and Rocksteady, while arguing over a Captail Cow comic book, disrupt the Super Laser remote control equipment, causing the Super Laser to cut a hole in the ice, causing the Technodrome to fall through and pluge to icy cold depths of the Arctic Ocean.