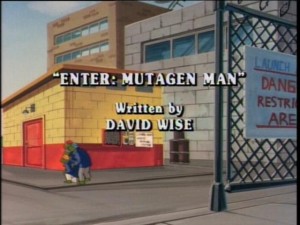 In the frozen tundra of the Arctic Polar Cap, Krang rants and raves that Rocksteady and Bebop will not return in time with the “Bindex 3” to load the mutagen into the rocket ship’s fuel tanks before lift off. This is Krang’s latest scheme and it is designed to turn all the City’s inhabitants into horribly disfigured mutants from the vapor trails of the fuel used to lift the rocket off the launch pad and send it into space.

Rocksteady and Bebop screwed up. While everyone is arguing about it, a messenger known as Seymour Gutz, from the Fly By Night messenger Service, arrives with a letter for The Touch of Romance Flower Shop. No one knows how he got into their “hideout” so Rocksteady and Bebop start blasting at him to encourage him to leave.

Suddenly, the catwalk that Seymour is standing on is hit by laser fire and he falls into the vat of mutagen and literally “goes to pieces”. After creating a special suit that “holds” his body together, Krang and Shredder discover that he has a special power — one that enables him to transform himself to look like anyone he chooses. Unfortunately it only last for a few minutes.

Seymour Gutz is one unhappy camper. Rocksteady and Bebop think he is pretty neat and call him Mutagen Man. Shredder “promises” to turn Seymour back into his old self if he does him a favor — go to Ace Scientific Company and retrieve the Bindex #3 chemical.

Transformed into a security guard, Mutagen Man enters Ace Scientifc Company, obtains the Bindex #3 — but changes back into Mutagen Man before he can exit the building. He encounters April and Irma, who are there covering the story. MM makes the mistake of locking Irma into a closet and “transforming” himself into her. April tells “Irma” that they have to return to Channel Six and April unknowingly loads the Bindex #3 canister into the Channel Six News Van. Before Mutagen Man can retrieve it, he starts to feel “the change coming on” and runs away. April returns to Channel Six News and Mutagen Man returns to Shredder.

Back at Channel Six, April is upset by Irma’s strange behavior and discovers the Bindex #3 canister and contacts the Turtles after Irma shows up upset with April for locking her in the closet.

While trying to figure out a way into the Channel Six News building, Mutagen Man sees the Turtles and transforms himself into “Michaelangelo” and follows them to the entrance of the building. When he hears the TMNT talking about the Bindex #3 canister, he realizes that he must keep them away from it. Suddenly, MM transforms into a “Little Old Lady” who is stuck in traffic. Two of the Turtles come to her rescue only to find that they need rescuing from “her”.

Then “transformed” back into Michaelangelo, Mutagen Man sends the other two Turtles up to the top of a construction site to “rescue” a perfectly safe construction worker.

Inside the Channel Six News building, Mutagen Man transforms himself into “Vernon” and pretends that the Ace Scientific Company called and asked him to return the canister. April thinks it’s strange and decides to follow him. A few minutes later “Vernon” transforms back into Mutagen Man causing April to scream. Before she can run away, Mutagen Man captures her and places her life in peril. April is saved by the Turtles just moments before she is about to be caught in the gears of the East River Sky Tram Company.

Back at Shredder’s hideout, Mutagen Man returns with the Bindex #3. Shredder reneges on his promise to return Seymour Gutz to his old self and pulls the cable out of MM’s suit that continuously feeds him the Mutagen. Shredder then heads to the launch site with Rocksteady and Bebop.

At the launch site, Mutagen Man helps the Turtles foil Shredder and Krang’s plan by transforming himself, first into “Rocksteady” and then into “Krang” and confusing Shredder by giving him conflicting orders. However, by the time the real Rocksteady and Krang escape, it is too late. The rocket is ready for lift off.

Once again Shredder, Krang, Rocksteady and Bebop escape, while the Turtles retire to their lair to eat pizza.