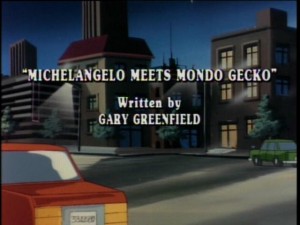 Michaelangelo awakes in the middle of the night from a bad dream. Unable to remember what it was about, Splinter assists him through hypnotism. Mikey vividly recalls the day that he and his brothers fell into the sewer and landed in the green ooze but he also sees a small lizard crawling through the contaminant and then something picks up the lizard and carries it away. That is all the Michaelangelo can remember. Splinter advises the Turtles to go back to sleep as he returns to his own bed chamber.

Unable to sleep, Michaelangelo ventures down into the sewers, trying to locate the tunnel from his dreams. No sooner does he find it, then a burglar alarm sounds from above the streets and he “beats feet.”

Up on the street, Michaelangelo encounters three punks running away from the Second City Bank with bags of money. He tries to stop them, but is less than successful. On his way back through the sewers, Mikey is run down by one of the bank robbers riding a skateboard. Michaleangelo chases the bandit into a dead-end, only to discover that the punk is a mutant known as Mondo Gecko. Something about Mondo is very familiar to Michaelangelo. But before the puzzled Turtle can decipher it all, Mondo Gecko strings him up like fresh meat and leaves him hanging while he makes his escape.

An embarrased Michaelangelo manages to untie himself and proceeds to follow the mutated lizard. Mondo Gecko’s skateboard tracks lead him to an abandoned warehouse where Michaelangelo overhears Mondo Gecko and the other two punks, Basher and Sluggo. The robbers are getting their crime orders to hijack an Army truck carrying a top secret explosive from a voice identified only as Mr. X.

Michaelangelo attempts to stop Gecko but once again finds himself in another embarrasing situation. Mikey is once again captured. Basher and Sluggo want to feed him to the sharks but Mondo Gecko decides that they should take him to Mr. X and let him decide what to do with him.

Afther the hijacking, Michaelangelo attempts to contact the other Turtles via his TurtleCom, but before he can give his exact location, Basher destroys it. Immediately afterwards, April contacts the Turtles with news of the same hijacking.

At Mr. X’s hideout, Mondo Gecko goes inside to deliver the top secret explosive and instructs Basher and Sluggo to watch the truck and the Turtle. They do — only they watch it go over a 1,000 foot cliff. Mondo Gecko returns in time to save Michaelangelo’s life but, he doesn’t know why.

Mondo delivers him to Mr. X who has just finished blackmailing the Army for the return of the top secret explosive — if they do not deliver $5 billion in seven minutes he will set off the bomb.

Michaelangelo realizes that Mr. X was the guy in his dreams. Mr. X realizing that Michaelangelo knows too much, orders Mondo Gecko to “finish him off.” When Mr. X leaves the room, Michaelangelo fools Mondo Gecko with Splinter’s pendant and hypnotizes him. Mondo tells his life story of how he remembers being in a dark sewer with some turtles crawling around in some green ooze and how some guy picked him up and took him back to his place where he taught him everything he knows about being a criminal.

Michaelangelo has heard enough. He snaps Mondo Gecko out of his trance and tells him that he is not bad — that Mr. X made him that way. Mikey goes on to tell Mondo that they came from the same sewers and that they were born to be “best buds”, not enemies.

Mr. X re-enters the room to discover Michaelango still alive. He now orders Basher and Sluggo to finish the job. Mondo Gecko protects Michaelangelo and causes the two incompetent punks to knock the top secret explosive off of the desk, which activatea the timer.

As Mr. X is about to do the job himself, the other three Turtles arrive and save the day. Mondo Gecko ends his life of crime and moves into the sewers where he becomes “neighbors” to the Turtles and Master Splinter.