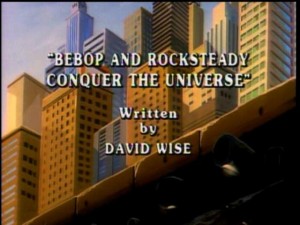 Zach sees Rocksteady and Bebop arrive through a portal, but because of a Turtle Com malfunction, cannot notify the Turtles. He follows the two mutants, who steal an Anxietron Ray for Krang and Shredder. This device has the power to make people frightened of anything. While testing out the ray, Bebop and Rocksteady start thinking that they could rule the world with this ray gun. They zap Krang and Shredder with the ray, turning them into cowering fools.

Meanwhile, while April is shooting a story on a new Gorgonzola movie, Bebop and Rocksteady arrive and scare everyone away. When they start playing with the controls for the Gorgonzola monster April threatens to call the Turtles. They find this amusing and throw her inside the robot.

Back in Dimension X, Krang and Shredder manage to find an antidote for the effects of the Anxietron Ray. Furious at Bebop and Rocksteady, Shredder makes a trip to Earth and retrieves them before the Turtles capture them.