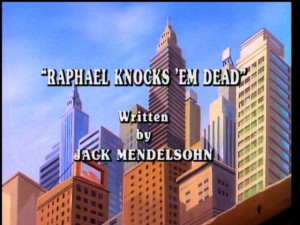 Raphael sees a comedian myseriously disappear while doing a show at the House of Ha Ha. Just then, April calls to ask him to go check the disapperance of the comedian at the club. Raphael goes to investigate and is thrust into the spotlight when the club’s owner mistakes him for a comedian wearing a costume.

Donatello, Michaelangelo and Leonardo are watching Raphael on TV and see him suddenly disappear. They decide to go to the House of Ha Ha to see if they can find out what happened to Raphael.

Meanwhile, Raphael finds himself at Pinky Mcfingers house along with the other comedians. Once he has Raphael strapped down, McFingers tells him of his brilliant plan. Barney Stockman (Baxter’s brother) has invented a gag-a-magnifier for McFingers. This machine increases the comedy power of jokes. They are going to hook up the funniest comedian to it and transmit the joke waves all over the city, making everyone hysterically helpless. This will enable McFingers and his two goons to go out and rob the city. Being the funniest comedian, Raphael is forced to start telling his jokes.

Donatello, Michaelangelo and Leonardo track the source of the “laugh wave” to McFinger’s mansion and rescue Raphael and the other comedians. Raphael turns the gag-a-magnifier against the villains making them helpless to escape. April arrives with the police and they arrest McFingers, his goons and Barney Stockman.