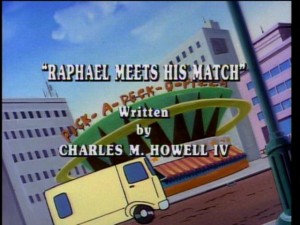 Raphael wins a ticket to a costume party on MacDonald Crump’s yacht and decides to go disguised as a Teenage Mutant Ninja Turtle. April and Vernon are also attending the party for the TV station.

As Raphael boards the yacht, a woman in what appears to be a female mutant costume shows up, grabs his arm and pretends to be his date. Raphael discovers that the women’s name is Mona Lisa and she is a mutant just like him. He gets suspicious of her when she tells him that a pirate named Captain Filch is going to hijack Crump’s yacht and hold it and its passengers for ransom.

Soon after, the yacht is hit by a force field, stopping it in the middle of the ocean. Raphael begins to believe Mona Lisa when he sees Captain Filch and his anemone guards board the yacht. The two mutants, along with April and Vernon hide away from the Captain. While in hiding, Mona Lisa tells them how she was transformed into a mutant by Filch. She swore to get revenge on the Captain for what he did to her and that’s what led her to the yacht.

Raphael and April decide to help Mona Lisa in her quest. While trying to radio for help, April gets captured by Filch’s guards. Filch makes her go on the air demanding money for the passengers on the yacht or he will drown them all.

Donatello, Michaelangelo and Leonardo see April on TV and go in search of the yacht. They get there just as Filch is forcing April to walk the plank. With the help of Mona Lisa, the Turtles blow up Captain Filch’s submarine and capture him. Later, Mona Lisa surprises the Turtles by showing up at the lair with pizzas for them.