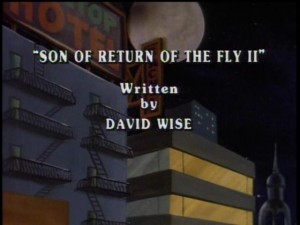 SON OF THE RETURN OF THE FLY

The Turtles try to assist a scientist, Herman J. Melish, who is being chased down by two men trying to get their hands on an invention of his energy generator crystal. The crystal slips away and drops into the sewer.

Baxter “The Fly” Stockman, marooned in some weird dimension with his alien computer, “Z”, manages to return to Earth and find the energy generator. This generator can turn energy into material objects. “Z” uses the generator to make himself a body. After this, Baxter and “Z” come up with a plan to get revenge on Shredder. They head for the Channel Six building planning on taking it over. They figure that the Turtles will try to rescue April, and when they do, Baxter will capture them to use as bait for Shredder. Their plan worked just as they had hoped.

Baxter captures the Turtles and “Z” sends out a message over the air telling Shredder to come and get the Turtles before Baxter beats him to it. Shredder, who is on Earth looking for a super computer that Krang has tracked to the Channel Six building hears “Z’s” announcement and goes to get the Turtles. Just when Shredder thinks that he has finally got the Turtles, Leonardo gets free and the Turtles escape to rescue April.

Shredder also heads to the Channel Six building and there he finds the super computer “Z”. Baxter follows him and soon after, they are having a tug of war with “Z”. Shredder wants him to bring back to Dimension X and Baxter is trying to keep him from going. The Turtles walk in and intrigued by the sight, just watch as they fight over “Z.” Herman Melish walks in looking for the Turtles and discovers what has happened to his invention. After seeing Shredder and Baxter fight over it, he pulls out a self destruct remote. Leonardo grabs it from him and presses the button. Shredder, Bebop and Rocksteady manage to escape back to Dimension X before “Z” blows up. Baxter flies after Shredder with “Z” (now just a computer chip) but does not get through the portal in time and ends up being stranded in another weird dimension again.