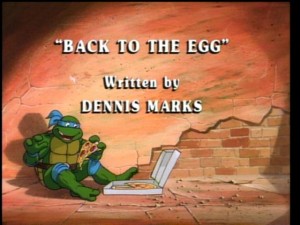 BACK TO THE EGG

Krang invents an age reversing serum that turns any creature into a younger version of itself. He decides to send Captain Kroolik and Grillox, a mutant circus performer from Dimension X, to track the Turtles down and squirt them. Shredder is also sent to go with the Captain. Once they have captured the Turtles, Captain Kroolik intends on putting them in his circus as performers and that will give Krang the opportunity to take over the city.

The Turtles are tracked to a pizza place where Kroolik only gets a chance to squirt two of the Turtles’ pizza with the serum. Michaelangelo and Leonardo eat those two pizzas turning them into little Turtles. Not knowing what the cause was for the shrinking, Donatello and Raphael take them and head back to the lair. On their way, they run into the Captain and Shredder who are waiting to capture them. The Turtles manage to escape and continue to the lair. Donatello and Raphael figure that Krang and Shredder are behind what happened to Michaelangelo and Leonardo and head back to the pizza place to find pieces of the original pizzas. While those two are away, Michaelanglo and Leonardo wander off and end up at the Channel Six building with April. She radios Donatello and tells him that Michaelangelo and Leonardo are with her. Donatello asks April if they can stay with her while he and Raphael try to come up with an antidote. In order to keep them occupied while she works, April brings them into one of the studios that is taping a kids show and puts them in the audience.

Donatello and Raphael come up with an antidote and put it on pizzas to bring to Michaelangelo and Leonardo. They arrive at the news building to find that Kroolik and Shredder are waiting for them. Donatello tosses the pizzas to Michaelangelo and Leonardo turning them back to their normal size. With the odds stacked up against them, Kroolik and Shredder flee through a portal back to Dimension X.