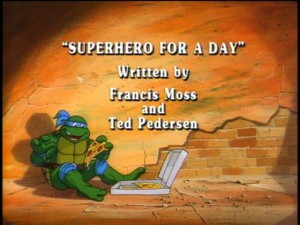 SUPER HERO FOR A DAY

April radios the Turtles telling them that Shredder has been spotted at a power plant in the city. The TMNT set off to see what their arch-enemy is up to. On their way, they run into Gadgetman, an over the hill super hero, who is trying to make a come back by attempting to rescue kids from a bus. His plan puts the kids in more danger, but the Turtles come to the rescue in the nick of time. They try to persude him to retire and let them handle the problems of the city, but he gets angry and storms off, not realizing that the entire event was being aired.

Krang happens to watch the event on one of his video screens and gets a brilliant idea on how to keep the Turtles preoccupied with Gadgetman so Shredder will have enough time to install the amplifiers. Krang sends Shredder to go and see Gadgetman. The Shredder claims to be a super hero agent and tries to convince the older hero to work with Shredder in effort to get the Turtles out of the picture. Of course, GM doesn’t know that Shredder intends to get rid of the Turtles permanently. Shredder stages a bank hold up which makes Gadgetman look like a hero again to the public.

The Turtles realize that the hold up was a distraction set for them so Shredder would have time to get to another power plant. When they arrive at the plant, Shedder is waiting for them and captures them. April, who follows the Turtles looking for a story, gets there just in time to rescue them before the plant blows up. Back at the lair, Splinter and the Turtles figure out Krang’s plan and track Shredder to the last power plant. When they arrive, they discover that Shredder has already begun to drain the energy from the city and started to transport it to the Technodrome.