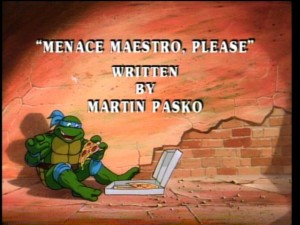 April calls the Turtles to meet her at the Floxy Theater, due to rumors that a phantom is haunting it, scaring all the workers away. When the Turtles get there they find Irma, Howie and Howie’s friend, Eric, there. Howie and Eric are working on the pipe organ in the theater and they wanted the Turtles there to see if they could help fix it. Somehow the organ is giving off blue rays when certain keys are played.

Meanwhile, in Dimension X, Krang has invented an energy accumulator which can soak up power from any source. Once he finds this power, he intends to use it to fuel the Technodrome and travel back to the Earth. While Shredder is testing the launch computer in the Technodrome it starts going haywire due to some kind of interference from our home world. Krang tracks it and discovers that it is coming from the blue rays in the organ. The rays are giving off tremendous power which Krang knows he could use for the Technodrome. He sends Shredder, Bebop and Rocksteady with the accumulator to the Earth.

When Shredder arrives at the theater, he decides that the only way to get near the organ is to dress up like the phantom and try to scare everyone away. The Turtles are not frightened by the disguise and start searching the theater for him. Soon after, they discover that the phantom is really Shredder, but at the same time they also meet up with another phantom.

Shredder gets away, but the Turtles manage to capture the other phantom. They discover that it is Eric and that he is actually an alien from another planet that crashed 100 years ago. The organ they have been trying to fix is his spaceship and he thinks that Howie did something to it. The Turtles and Erk (Eric) confront Howie and he tells them that he put the left over alien micro chip (from the last episode) into the organ. Knowing that, Erk knows what to do to fix it.

When they get back to the organ, they discover that Shredder has already started to drain the power from the instrument. The Turtles, Erk and Howie distract Shredder which enables Erk to fix the spaceship before Shredder can drain any more power. Erk returns to his home and Shredder returns to Dimension X without any power for the Technodrome.