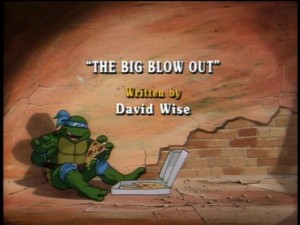 The Technodrome rises to the surface once again and Shredder tries to blow up the news van with April and the Turtles in it. He misses and they get away.

Splinter and the Turtles follow the Technodrome to a power plant where Krang seizes control of a giant dish antenna. With the antenna, he plans to draw off all the Earth’s energy and send it to Dimension X. They try to stop the Technodrome by electrocuting it, but it does not work. Splinter sneaks his way into the Technodrome and meets up with the Shredder. Shedder realizes that it is his chance to get rid of Splinter once and for all. He is almost on the verge of victory when Michaelangelo and Leonardo come in and assist Splinter.

The Turtles need to come up with a plan to stop Krang before the Earth is sucked into Dimension X. The army tries to help but they are no match for the powerful Technodrome. The TMNT borrow a missle launcher from the army and take it with them to the sewers. Michaelangelo and Leonardo get the Technodrome to follow them until it is over a sewer drain. The second it is there, Raphael and Donatello launch the missle and send the Technodrome to Dimension X, saving the Earth from destruction once again.