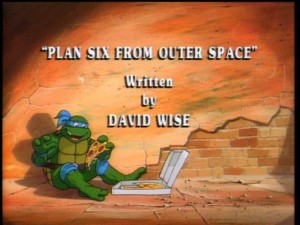 At the close of the previous episode, the Turtles sent the Technodrome back to Dimension X with Krang, Shredder, Bebop and Rocksteady in it. A furious Krang and Shredder plot revenge and send Bebop and Rocksteady to Earth to bring the entire Channel 6 building back to Dimension X via trans-dimensional thrusters. In order for them to go to Earth unnoticed, Krang disguises them as humans. The disguise only lasts for a few hours though, so they must hurry. The mutants also have a Pretendicon, a robot disguised as Splinter, to lure the Turtles into the building as it is sent to Dimension X.

The Turtles thinking that the Technodrome is out of the picture, are trying to plan a long awaited vacation.

Meanwhile, Bebop and Rocksteady get hired as Channel 6 janitors and quickly get promoted to VP’s in charge of programming. They get caught up in their new jobs until Shredder calls to remind them why they are there.

The Turtles encounter the Pretendicon/Splinter and think their sensei has lost it after being hit on the head by a sign. They discover that he is not their master after the real Splinter radios them to tell them that April has been captured by Bebop and Rocksteady. They head for the Channel 6 building and discover what Bebop and Rocksteady are up to. They locked April in a locker in the basement and started setting up the thrusters. Finally, just as the Channel 6 building is launched, the Turtles disconnect the thrusters, rescue April and send Bebop and Rocksteady back to Dimension X.