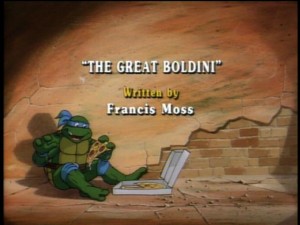 The Turtles, Zach and his friend Caitlin visit the Museum where a magician, the Great Boldini, intends to make a valuable emerald disappear. Everything seems to be going well until the light come back on. The audience sees Boldini tied up, gagged and the emerald is missing. He insists he has nothing to do with it. Everyone at the museum is searched. During the search, the Turtles are revealed and arrested.

Zach and Caitlin follow Boldini thinking that he is acting suspicious. They discover that he’s working with Don Turtelli and that he did indeed steal the emerald.

The Turtles escape and break back into the museum searching for Zach and Caitlin.

When the Turtles enter the museum, they discover that it has been taken over by the Rat King. The Turtles battle the bad guys. The museum’s temperature control goes haywire making it snow in the museum. The Turtles capture Boldini and Turtelli and hand them over to the police. After Zach and Caitlin are freed they return the emerald to the museum. The Rat King escapes.