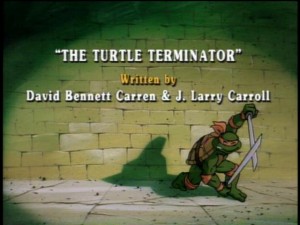 SYNOPSIS:
Rocksteady and Bebop, on Shredder’s orders, kidnap Irma, who pleads with them to wait until tomorrow — it seems that she has a date with a handsome weatherman from Channel Six News. As soon as April discovers Irma has been abducted, she contacts the Turtles.

At his secret hideout, the Shredder activates his “Turtle Terminator” to replicate itself to look just like Irma. He then sends the Irma/Turtle Terminator out on its mission — to destroy all turtles.

Irma/Turtle Terminator returns to Channel Six News and professes that nothing has happened to her nor has she seen Rocksteady and Bebop. April reports to the Turtles that Irma is back and that everything is fine but the Turtles are doubtful. They continue to investigate.

However, when Irma/Turtle Terminator overhears Burne Thompson refer to his girlfriend as a “turtle dove” she fires a laser blast out of her eyes, melting the telephone. April realizes that something is wrong. It’s observation skills like this that have made her a top notch reporter. ;)

While the Turtles are following Rocksteady and Bebop in hopes that they will lead them to Irma, April contacts the Turtles and warns them about the bogus Irma. She fears that every time someone says the word “turtle,” the station and all the Channel Six News employees will be in jeopardy. The Turtles agree to help but not until they save the real Irma.

Donatello repairs it and sends it back to the Technodrome, via a Transport Module, where it has been reprogrammed to “zap” Krang, Shredder, Rocksteady and Bebop.