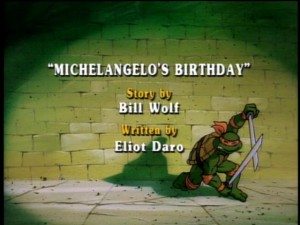 SYNOPSIS:
While making repairs on the Technodrome, Krang and Shredder discover a primordial ooze bubbling up from the center of the Earth. Krang discovers that it is an anti-mutagen and he plans to use it on the Turtles, thus reverting them back to their original natural states — baby pet shop turtles!

Meanwhile, Michaelangelo is brooding because he believes that no one has remembered his birthday. After many attempts to remind them — he leaves the Lair.

Back in the city, the Shredder, Rocksteady and Bebop are wreaking havoc in an attempt to draw the Turtles’ attention. It works. Splinter decides to search for Michaelangelo while he sends the remaining Turtles after Shredder.

The Turtles encounter the Shredder with little effort. However, the Shredder has little success in spraying the anti-mutagen onto the Turtles. It seems that he can not get them to stand still. The Shredder decides it better to “live to fight another day” and escapes.

Back at the lair, the Turtles get a call from Rocksteady, via Michaelangelo’s Turtle-Com, demanding the Turtles meet them in another part of the City or Michaelangelo “dies.” However, Michaelangelo is able to escape and sets out to save his brothers — but he is too late. The Shredder forces the Turtles to drive him back to his secret hideout to show them what he believes is the remains of Michaelangelo. He zaps them with the anti-mutagen spray but rather than diverting them back to baby turtles, the spray causes the Turtles to “blow up” like a Macy’s Thanksgiving Day Parade balloon.

Before Shredder can revel in his victory Splinter and Michaelangelo show up, and defeat Shredder, Rocksteady and Bebop. Splinter produces three “magic spheres” (moth balls) that revert Leonardo, Donatello, and Raphael back to their normal mutant selves.