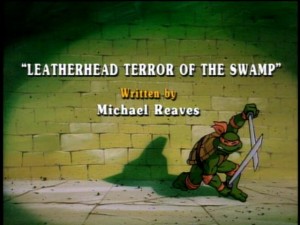 LEATHERHEAD: TERROR OF THE SWAMP

SYNOPSIS:
While Raphael is reliving the past, via the Turtles’ photo album, their Frog friends in the Florida Swamps (Napolean Bonafrog, Genghis Frog, and Rasputin) are being terrorized by a mutant alligator known as Leatherhead, who makes them his slaves. They decide to call the Turtles for help.

Meanwhile, Krang’s scanner picks up Leatherhead’s activities and he sends Shredder, Rocksteady and Bebop to the same Florida Swamp to retrieve the mutant alligator and use him to help defeat the Turtles.

Shredder and company arrive in the Florida Swamp and stumble upon the Turtles and April, the Frogs and Leatherhead. They decide to track them for awhile before charging in and attacking. Sure enough he finds his golden opppportunity when he rescues Leatherhead from the quicksand that the Turtles, the Frogs, and Leatherhead have fallen into.

They escape and clean themselves off in a nearby pond only to discover that it is tainted with mutagen and has a “Fountain of Youth” quality to it, making the Turtles feel “pumped up.”

The Shredder and Leatherhead decide to team up against the Turtles and the Frogs. During a battle, Shredder falls into the “Fountain of Youth” and “mutates” back into a young boy, while Donatello deflects a laser blast causing a dam to break, which results in a flood of water crashing down the hole created by the Transport Module. The “baby” Shredder, Rocksteady, and Bebop are carried with it and delivered to Krang in the Technodrome.

Leatherhead admits defeat and retreats back into the swamp.