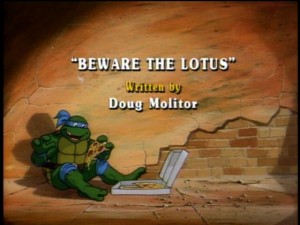 SYNOPSIS:
Krang hires a female Ninja, Lotus, to replace Shredder. It seems that Lotus has agreed to help Krang locate the Turtles in exchange for 100 pounds of gold. To prove her worthiness, and Shredder’s unworthiness, Lotus defeats him with her Ninja skills. Shredder, Rocksteady and Bebop leave the Technodrome with their tails between their legs vowing that Krang will someday beg to have them back. Meanwhile, Burne assigns April and Vernon to do a special story on romance. At the Olaf Perfume Factory, April interviews a Monsieur Olaf, who reveals that he has a “Scent Analyzer” that can “sniff out” any fragrance. But, while protected by three armed guards, is suddenly stolen by Lotus and in its place, she leaves a lotus flower.

A short time later, Lotus visits Aqua Land, and steals from Dr. Gilman, a marine biologist, his complete file on his study of genetic codes of turtles. Once again she leaves a lotus flower in its place.

Back at Lotus’ secret hideout, somewhere in the City, Lotus programs the Scent Analyzer with the genetic code of turtles. Within moments, the Scent Analyzer points and leads the way to the Turtles’ Lair. After a heated battle, Lotus and the Foot Soldiers escape with Master Splinter. But after crossing swords with Lotus, and being defeated by her, Leonardo is in love!

Meanwhile, Shredder learns of Lotus’ secret hideout and he decides to lead the Turtles right to her so that they can battle each other, causing her defeat. Shredder is convinced that this will put him in good stead with Krang.

Leonardo and Lotus cross swords again. Once again they are equally matched. They each try to convince the other that they should team up — but for different reasons. They can not come to an agreement, and once again Lotus defeats Leonardo.

When Shredder bursts in Lotus’ hideout and accuses her of treachery, Krang calls the deal off. Incensed by the loss of her gold, Lotus teams up with the Turtles and helps them defeat Krang and Shredder.