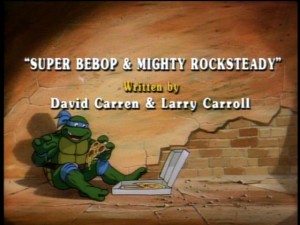 Back at the Technodrome, Krang, who is furious with yet another failure by these two mutants, unvails his Super Mutants: cybernetic clones of Rocksteady and Bebop: SUPER ROCKSTEADY and MIGHTY BEBOP. Shredder is impressed with his new lackies and returns to Earth with them to reinstall the Mesmerizer atop the Channel Six NeWs Building tower. This time, Krang has provided him with an amulet that will protect him from the zombifyng effects. However, Rocksteady and Bebop neglected to tell Shredder that the Mesmerizer was broken.

Once the Mesmerizer is afixed atop the Tower and turned on, people all over the city, rather than become zombies, have reverted back to their childhood. The Turtles storm the Channel Six News Building and encounter Super Rocksteady and Might Bebop who have only one thing on their minds: DESTROY TURTLES!

Back in the Technodrome, Shredder complains bitterly to Krang about the Mesmerizer. Krang suddenly realizes that Rocksteady and Bebop broke it and orders them back up to Earth with a computer disk that contains a schematic of the Mesmerizer that will enable Shredder to repair it. True to form, they take the wrong disk and, to add insult to injury, lose it to the Turtles, who discover that the disk contains the schematics for the Super Mutants.

Meanwhile, Rocksteady and Bebop have done even more damage to the Mesmerizer, as it continues to change colors and everyone effected by it begins acting, first like dogs, then like monkeys. Shredder is really angry now! Especially when he learns that the Turtles have also reprogrammed the Super Mutants.

The Turtles storm the roof and topple Rocksteady, Bebop and the Mesmerizer from off the tower. This causes the Super Mutants to self destruct, but the Mesmerizer is still intact. Suddenly, Donatello realizes that the amulet around Shredder’s neck prevents him from behaving like the other humans. In the blink of any eye, it is removed and Shredder drops to the floor and begins acting like a monkey.

Once again, the Turtles prevail.