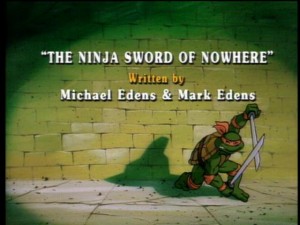 THE NINJA SWORD OF NOWHERE

Krang’s computers detect an alien metal on the surface of the Earth, so naturally Krang sends Shredder, along with an Alien Metal Detector, to the surface to find it. Meanwhile, the Turtles realize that it is National Sensei Appreciation day and they must go out and buy Splinter a present.

Later, at the pawn shop, the Turtles, dressed in their trenchcoats and fedoras, purchase an old ninja sword. As they leave, Shredder, Rocksteady and Bebop arrive via their Transport Module at a laundromat across the street. Krang’s Alien Metal Detector begins “sounding,” indicating that what they seek can be found in the pawn shop – but when they arrive, the signal weakens. Shredder is convinced that the “four men” who left the shop before they arrived possess the “Alien Metal.” When the pawn shop proprietor tells him that they had purchased a sword – Shredder is even more convinced.

In a nearby alley, Shredder, Rocksteady and Bebop bushwhack the “four men,” only to discover they are the Turtles. This time, the TMNT get their butts kicked and Shredder takes possession of the Sword. But when he attempt to use it against them, he cuts a hole in time/space and disappears into it.

At the Technodrome, as Rocksteady and Bebop feebly try to explain Shredder’s disappearance. Shredder suddenly returns in the same manner in which he disappeared. Shredhead is perplexed, and Krang explains that the metal in the sword was used to make alien spacecrafts that can travel between dimensions in a mere microsecond. A visiting spaceship left a fragment of this metal on Earth thousands of years ago, then apparently a Ninja craftsmen found the alien metal and forged the sword.

Back at the Turtles’ lair, Splinter is informed of the sword and its power as he recalls a legend of a mysterious ninja sword that allowed its user to appear and disappear at will. Splinter warns the boys that they must retrieve the sword before Shredder and Krang use it for their evil plans.

Splinter, April and the Turtles create a bogus news report that pinpoints the location of the Turtles but before they can put the rest of their plan into action, Shredder arrives, kidnaps Splinter, drags him into another dimension and traps him there. Shredder returns to the sewer and demands the Turtles surrender if they wish to ever see Splinter again. The villain gives them one hour to come to a decision.

April and the Turtles create another bogus news report to lure Shredder to a local salvage yard where they plan to surrender. Shredder arrives, as expected, and is engaged in combat by the Turtles as they try to gain possession of the sword. Suddenly, another dimensional hole is opened and an Alien Spaceship lands in the salvage yard. Two antique collecting Alien Yuppies take the sword and head back to their dimension. The Turtles try to stop them by securing the spaceship to April’s news van – but that is not enough. The Spaceship lifts up into the sky and through the dimensional hole with the news van, April and the Turtles dragging behind it. Splinter uses this opportunity to dive through the hole as the Turtles and April are being lifted through it. Happily, they all land on their keesters in the salvage yard as the Spaceship disappears through the rift in time and space.