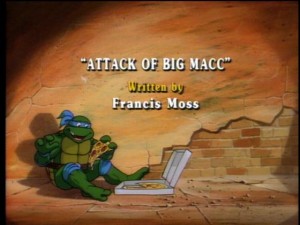 ATTACK OF THE BIG MACC

The Turtles are watching April’s special report, live from the Army testing laboratory, on the first public display of a new Super Laser, when suddenly, a bolt of lightning from an electrical storm overloads the Super Laser’s computer, causing it to blast a hole into space and another dimension – which enables a Robot to be transported into the laboratory. Thinking that it is some form of an alien monster, the military tries to destroy it. The Robot is amused and fires a laser beam that melts their weapons. The same thing occurs when the scientists try to use their new Super Laser on their unknown visitor.

After witnessing the above events, the Turtles are convinced that Shredder and Krang would love to get a hold of whatever that “thing” is.

Meanwhile, down in the Technodrome, sure enough, Krang has seen the same Special Report and wants that Robot. He sends Shredder, Rocksteady and Bebop up to the Earth’s surface with a “Docilator” – a device that if attached to the Robot’s neck will make it docile – enabling Shredder to return it to the Technodrome where Krang will use it to conquer the world.

Back at the Army Testing Laboratory, the troops are still firing upon the Robot, which of course is returning the fire. April is still on the air when she is captured by the Robot. The Turtles hustle out of the lair and over to the lab to rescue her. Once there, the TMNT are foiled by the Robot until Michaelangelo “surrenders.” The Robot stops fighting and introductions are made. It seems that the Robot, named MACC (Motor-Armored Computerized Combatant) is from 400 years in the future and is a “peacenik” at heart. As the Turtles prepare to leave with MACC, he is captured by Shredder, who places the Docilator on its neck, thereby putting MACC under Shredder’s complete control. When the Turtles try to rescue MACC, Shredder orders it to destroy them. However, MACC rips off the Docilator and fires upon Shredder, Rocksteady and Bebop, causing them to flee to their nearby Probe Module. April is excited to learn that their Robot Warrior is actually opposed to violence and invites it to an exclusive Channel Six News interview – to which it agrees.

Back at the Technodrome, news of Shredder’s failure is not welcomed. Krang supplies Saki with a “new and improved Docilator,” and sends him back to the surface to capture MACC.

After the interview, the Turtles bring MACC back to their lair to meet Splinter – but MACC begins to behave strangely. Donatello is convinced tha the travel through time has screwed up MACC’s circuitry and that he may be a danger to himself and others. MACC overhears this conversation and, not wishing to hurt his friends, leaves the lair only to be caught, once again, by Shredder, who immediately slaps the new and improved Docilator on his neck.

At Channel Six News, Burne congratulates April on her exclusive interview with MACC only to have Vernon come rushing in with news that a Robot that looks like MACC is attacking a police station. April rushes out to cover the story and warn the Turtles.

The Turtles arrive at the police station and are attacked by MACC. The TMNT are afraid that the device Shredder planted on MACC is speeding up the deterioration process and that there is a good chance that he will explode, taking the entire city with him!

While tracking Shredder, the Turtles discover clues left behind by MACC. The trail leads them to the basement of a swanky hotel where they find an empty Probe Module. The TMNT decide to go for a ride.

Down in the Technodrome, Krang commands MACC to lead an army of his fellow robots through the Time Portal. The Turtles arrive but are quickly taken prisoner. Krang tells them of his fiendish plan and prepares to send MACC back to his own Dimension, only to have the new and improved Docilator fall from his neck. Free of the device, the good natured robot saves the Turtles. MACC and the TMNT defeat Shredder, Krang, Rocksteady, Bebop and the Stone Warriors. During the course of the firefight, the Time Portal opens and the Turtles convince MACC to return to his own Dimension, before he “blows.” The Turtles also encourage their mechanical friend to become a “warrior for peace” in his own era.