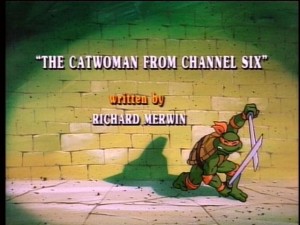 The Turtles contact April O’Neil and lure her with the promise of a great news story, but when she arrives she discovers that they need a new TV to replace the one that Rocksteady and Bebop destroyed during their encounter. It seems the boys in green are addicted to sci-fi movies and were in the middle of a marathon when Rocksteady and Bebop dropped in.

April is fascinated by these recent events and decides to track down the story. She starts by visiting Woo’s Oriental Palace, a Chinese restaurant whose name appears on the carton of Chinese food that Rocksteady and Bebop left behind. There, she learns the location of Shredder’s secret hideout – an empty warehouse on the dock, where she discovers the Matter Transporter. While April is busy taking photos, a stray cat wanders in, leaps up on the control panel and accidentally presses buttons. The feline then leaps on the Matter Transporter platform where April is standing and they’re both are enveloped by a bright light. When the light recedes, the cat runs away, leaving a very woozy April falling to her knees. Something has happened to her! Her nails are like CLAWS!

By the time April realizes what has happened to her, it’s too late! She’s become a mutated Cat. Irma tries to help her friend but there is nothing that she can do. Five minutes before air time, April jumps out of her dressing room window. Irma, who until now only suspected of April’s relationship with the Turtles, finds her TurtleCom and contacts the Turtles for their help.

Meanwhile, April returns to the warehouse to reverse the process, only to be captured by Shredder who plans to use her to help him catch a “rat.” Knowing that the Matter Transporter’s effects wear off in time, he attaches a Mind Control collar on April to ensure that she does his bidding.

While the Turtles learn the location of the warehouse thanks to April’s photographs, Cat-April finds and attacks Splinter. Using his TurtleCom, Splinter contacts the Turtles who manage to return to the Lair in time to remove the Mind Control collar from around April’s neck before she kills Splinter. Once again, Shredder has been foiled.