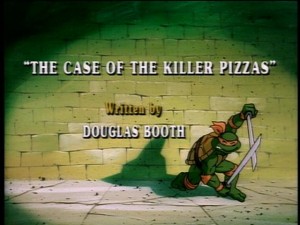 Krang finally relents and provides Shredder with help to defeat the Turtles, only his payment request this time is for some “eggs” from Dimension X that look like meatballs. Back on Earth, Shredder learns of a Pizza Bake-Off and decides to use this event to snare the Turtles.

Meanwhile, thanks to Shredder, the Turtles learn of the same Pizza Bake-Off and make plans to attend. Splinter suggests that Shredder may be nearby and warns them to be careful.

April and Irma attend the Pizza Bake-Off as well, and while Irma tries to avoid an old boyfriend, April discovers the Turtles presence and agrees to enter their names in the raffles for the Three Prize Pizzas.

Meanwhile, Baxter has placed each one of the “eggs” onto the Three Prize Pizzas while no one is watching. What he doesn’t know is that pizza maker has a rush order and sends two of the Prize Pizzas out on delivery and replaces them with fresh ones. Later, when the drawing is held, Baxter is chosen to read off the winning names. He lies and claims that the Turtles have won. April delivers the Three Prize Pizzas to the TMNT and they give her one in gratitude. April promises to take the pie back to Irma’s apartment and enjoy it. The pizza that O’Neil receives, of course, is the one with the “egg” from Dimension X.

Back at Irma’s apartment, Irma sticks the pizza in the microwave. The energy activates the “egg” and it cracks open, revealing a little Red Creature. The Red Creature devours the pizza and causes Irma to faint when she removes the box from the microwave and opens it up. April contacts the Turtles, who rush over and try to capture the little Red Creature, only to have it escape. Once they realize where it came from, it doesn’t take them long to figure out that there must be two others out there as well.

The Turtles fly over the city and spy Mario, the Pizza Delivery Boy, as he makes a delivery to Two Rich Spoiled Brats in a penthouse suite. The Turtles can’t prevent the brats from placing the pizzas in the microwave and the eggs are activated. The Two Red Creatures escape from the luxury high rise and lead the Turtles back into the sewers. The Two Red Creatures are joined by the original one from Irma’s apartment and they plunge into the underground river where they mutate into large, hideous yellow monsters.

While searching for what they still believe to be little Red Creatures, the Turtles stumble upon Shredder and Baxter Stockman who are controlling the Monsters with a handheld device. The Turtles are about to engage Shredder in combat when they are attacked by the Monsters. During the scuffle, Baxter loses the remote control device in the water. Now the Monsters are out of control! While Michaelangelo retrieves the remote control, the other three Turtles elect to side with Shredder in fighting the Monsters as Baxter reads the instructions on how to reverse the mutating growth pattern.

Michaelangelo locates the now water-logged remote control device and zaps the Monsters, who are only momentarily stunned. It seems that the remote control’s batteries are wet and will not function properly. However, Leonardo locates a power box and cuts the electrical lines. A loose line falls into a puddle of water and causes an arc to leap from puddle to puddle until it engulfs the Monsters. The Monsters are reduced back to eggs due to the overload of power.

The city is safe once again and, once again, Shredder and Baxter Stockman escape in the confusion.